COVID exposed numerous vulnerabilities in our healthcare infrastructure, bringing to light horror stories across the world – in developing as in well developed economies of the world. For instance, the peak of COVID’s second wave in India resulted in about 500K new positive cases per day and more than 400K deaths till now – a significant fraction of which were due to the lack of oxygen and could have been prevented.

Even in the United States, where the medical infrastructure is well developed, COVID has claimed more than 639K lives and exposed vulnerabilities in procuring critical medical technologies – ranging from ventilators to medical-grade oxygen. Particularly distressing has been the increased death rate in several countries due to the lack of availability of oxygen. 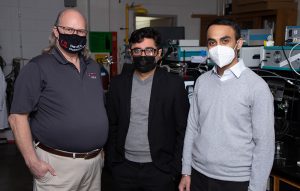 In spring 2020, the OxyCart project was begun initially as a relief effort idea in a critically needed area that would impact COVID-19. With community interest and some funding from friends and family, Drs. Gautam Gupta and Bikram Bhatia with the team set out to fight the pandemic, but the potential for this life-saving technology has quickly reached beyond the threat of COVID.

“The project started out with the message, ‘People are dying,’” said Gupta. “By the next day, 20 volunteers and community partners began lining up.”

Those critical partners included a manufacturing community partner, WaterStep, KY; Zeochem, KY, one of the largest zeolite manufacturers in the world; and Southeast DME, the largest oxygen concentrator refurbishing company in the U.S., located in Hodgenville, KY. Mark Hogg, CEO and founder at Water Step provided us with full access to their facility to do anything under its roof. Paul Lassanske, President and Founder at SEDME provided the team several oxygen concentrators, zeolite columns and their teams’ expertise without even thinking for a second. In addition, Jason D’Mello, a UofL alumni and professor at Loyola Marymount University, CA acted as social entrepreneurial lead and a true collaborator.

Gupta said he has never seen the stars align so quickly for a project. “I have been blown away by the level of collaboration on this project,” he said. “Without community, the project does not survive. “but no one turned us down” infact” everyone was ready to pitch in without any returns”

Since Summer, Dr. Atre, professor, Mechanical Engineering provided us seed funding via Canon Foundation to develop proof of concept oxygen concentrator. In fall 2019, the OxyCart team presented a grant proposal for their oxygen concentrator “OxyCart: An Efficient and Durable Oxygen Concentrator for COVID- 19 and Beyond” to the local PrePARE program. (Pandemic-Related Product Acceleration & Responsive Entrepreneurship Program Product Development) and received $50,000 to continue work on the project.

The team has created an improved and innovative oxygen concentrator that addresses drawbacks of the current concentrators on the market. Commercial O2 concentrators do not have a standalone moisture removal system and typically use a small radiator to remove heat thus limiting their widespread use. Based on these facts, several of these devices failed at an alarming rate in places with tropical climate such as India and southern USA where both moisture and heat are not optimal. The current OxyCart prototype addresses these concerns, which expands geographically where the oxygen concentrators can be used.

“There are huge global implications,” said Gupta. “Not just for COVID patients but in polluted places all over the world.”

In the next few months, “the team aims to perfect the assembly process and cut out extraneous parts or costs,” said Neil Gupta, a Duke biomedical engineering graduate on the OxyCart team.

“We are going to distribute system prototypes to community partners for feedback on changes in design we can make and do market research to see what direction this technology can take that will have the most impact,” he said. “Regardless of application or location, the device is meant to increase accessibility to clean, low-cost and high-purity oxygen gas.”

Students are the Stars

Gautam Gupta emphasized the key role students have played in the rapid development of this product, and said he has taken pride in watching the progress unfold. “The two most gratifying things about this project have been 1) watching the students develop the project from nothing to a stage where they can develop careers out of this, and 2) seeing the support from community members with open hearts.”

“We want to form an institute around this idea of having students come in, pitch ideas, and develop them while they’re still in school where they have guidance from faculty mentors, business school and the community,” said Willing.

The chemical engineering professor said this will give students the tools they need to take it from concept to commercialization. With the possible idea of adding this opportunity alongside traditional co-ops, students could ostensibly come out of Speed School and immediately start a company. “We have a goal of 28 companies by 2028,” said Willing. 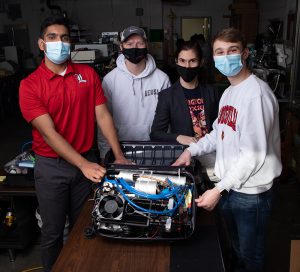 “It was a really rewarding experience,” said Van Speybroeck. I was taking fluid dynamics that semester and some days in class I would think, ‘Oh, that makes sense, I need to go change this now.’ Every day when we got the oxygenation up another 5 or 10 percent we were so excited it was like a party,” he said.

“It was really fast-paced,” added Luke Ralenkotter, also a ChE junior. “There was a sense of urgency. We knew we wanted to get it up and running as quickly as possible.” He said the OxyCart project has been an amazing learning opportunity. “I love looking at things deeper trying to get a better understanding, and trying to create things from that deeper understanding, and that’s exactly what this project was about.”

Chemical Engineering doctoral student Ted Kalbfleisch said he has worked with Dr. Gupta on virtually every project in the chemical engineering lab for the last few years.

“It’s been inspiring to see how driven this project is,” he said. “I always wanted to do big things, but I thought it would take years and years working up some ladder for some company, but when I discovered research, I realized you can just do that from a bench top.”

Kalbfleisch said he wants to stay in touch with the ChE lab and help with their outreach. “As I bloom and go out and become a professional, I want to help this lab make more connections because I’ve seen time and time again on every single project how they are trying to do good.”

Sophomore chemical engineering student Klemmer Nicodemus first met Dr. Gupta in Materials Science class last summer when he began his ChE course load. “I immediately just loved his class, loved his charisma, and when I found out about the project, I wanted to be the one right there with him,” he said.

He also recruited his two best friends, Cole Kidwell, who is studying electrical engineering, and Cole Dudley, in mechanical engineering. Even though the project originated in the chemical engineering lab, Nicodemus said he knew it could benefit from a multidisciplinary engineering perspective. 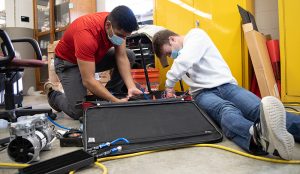 For Nicodemus, the project was personally revelatory. “I know it sounds cliché, but it was kind of a coming of age moment for me,” he said. “You think you’re just a college kid hanging out with your professor, getting to be with your friends and doing good work,” said Nicodemus. “But then you realize the big progress you’ve made, and you are thinking what kind of impact it can have. To be doing such good with people you love so much –it’s a dream come true. I am doing things that could save lives across the world,” he said. “There’s nothing like it.”