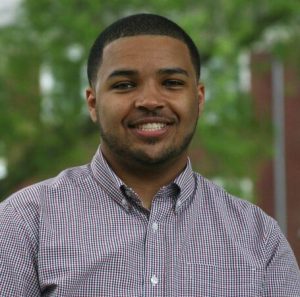 Imagine landing your dream job and being featured in Forbes Magazine at 22 years old. University of Louisville Speed School graduate student Richard Wilson can make that amazing claim. Wilson, who will graduate with his Master of Engineering in Engineering Management from Speed School in May 2022, was featured in an October 2021 Forbes article as an enterprising student who turned an undergraduate practicum at Meta (formerly Facebook) into a full-time career opportunity.

Currently a Technical Program Manager at Meta, he graduated in 2021 with a BS in Industrial Engineering, where he received the Woodford R. Porter Scholarship (full-ride, merit-based scholarship), co-founded the Entrepreneurship and Innovation Council, and served on the executive boards for the National Society of Black Engineers and Speed School Student Council.

As an undergraduate, Wilson was also the co-founder of a tech startup called Happnin, which was a location-based social media platform geared toward in-person events. He also completed entrepreneurial-focused programs with Harvard Business School and several fellowship and externship experiences with The Takeoff Institute (inaugural class), Ripple Ventures, Paragon One (venture-backed startup), and the National Venture Capital Association.

A native of Louisville, the engineer has relocated permanently to San Francisco to pursue his career while concluding his Master’s program. He said that his Speed School education has demonstrated its usefulness in multiple ways, including thinking about how to address people and challenges around the world in his new global operations role at Meta.

“One of the great things about Speed is the experiential learning, such as the Capstone project,” he said. “It’s up to you to figure out what’s going to happen, and how one can take on a leadership role. At Facebook too, there is not always a clear-cut answer. You have to figure out things on the fly,” said Wilson. Having that ambiguity in work has made me more comfortable for graduate work and working full-time.”

Being a full-time student while juggling a start-up company in 2018 taught Wilson to understand the concept of time management, especially delegation. “My experience with clubs and student council also lends itself to many parallels in my current work processes,” said Wilson. “It’s all about what needs to be done most quickly, who is in the best position to get those done, and what resources are lacking in what we need to execute the goal,” he said.

Wilson admits his career trajectory has been a whirlwind that has sometimes been a little intense. “In a very exciting three months in 2021, I accepted an offer at Facebook, finished my undergraduate degree, started my first class of graduate school, turned 22, and was interviewed by Forbes magazine,” he said.

In his current position, Wilson focuses on the development of supply chain initiatives in the application of the metaverse. He assesses how the metaverse’s scalability can be analyzed to be a space for individual users and third-party businesses who can conduct their operations from this new and exciting space.

Wilson said he appreciates the way Meta seems to value employees. “We work on many required projects, but can also work on flex goals, which are self-directed projects of your interest,” he said. “Meta is really focused on retention of individual employees, not just that employee in a specific role,” he said.

Despite his demanding new position across the country, Wilson is still invested in his hometown. As an associate in the University of Louisville Office of Research and Innovation, he and his team are developing and planning to launch a public rollout of an angel investor network. The network is particularly interested in the early investment of scalable technology startups.

“We are essentially looking at a number of different types of angels, understanding what their investment preferences are and garnering a collective to make sure people are aware of different investment opportunities,” said Wilson. “We want to build a community of investors to provide more sustainable capital for entrepreneurs who do depend on it.”

Back in elementary and middle school, Wilson spent five years with the famous Louisville Leopard Percussionists, playing percussion and learning trumpet, as well as playing piano, something he continues to this day. He also plays tennis often with his brother, Regis, who attends U of L’s College of Business and will be interning this summer at J.P. Morgan in the Chicago office as an Internal Audit Cybersecurity Analyst.

Wilson said when he reflects on all his time at Speed School, he credits it for helping him be where he finds himself today. “My overall experience at Speed School was super-enriching and it forced me to think unconventionally on a consistent basis, much like Facebook where we are always thinking outside the box.”