In Louisville, Kentucky, where there are twice as many barrels of bourbon as people, every aspect of bourbon is examined with interest, even the science of its molecular properties. To Louisville native Stuart Williams, Associate Professor, Mechanical Engineering at Speed School of Engineering, this field is rich with discovery and insights. Stuart received his bachelors and master’s degrees in mechanical engineering from Speed School, and returned there to teach in 2010.

With a background in studying fluid dynamics, his research has focused on the behavior of particles in suspension, also known as colloid science. In 2017, Stuart’s research yielded an interesting discovery. When American whiskey is diluted with water, it creates what he termed “whiskey webs.”  We talked with Stuart to find out more about his research into this phenomenon. 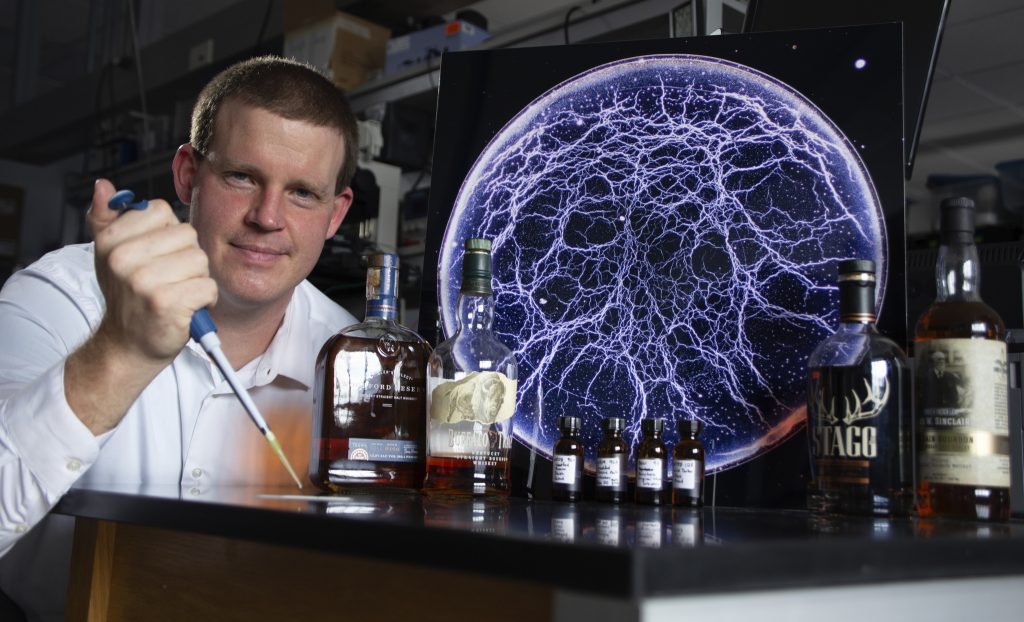 How did you become interested in “whiskey webs?” What is a Whiskey web?

My great uncle worked for Brown Forman distillery and, when I was a young professor looking at all the avenues of research, I reached out to Brown Forman and learned that there were colloids in bourbon. When I went on sabbatical in 2017 at North Carolina State, I took a case of bourbon to study its colloid science. We were motivated by a Harvard study where they evaporated Scotch droplets onto a slide, where it formed a uniform film.

For our experiment, we took whiskey at about 45% alcohol by volume (ABV) and diluted it with water to 20% ABV and evaporated it. We discovered, by accident, that the resulting patterns looked like webs, nothing like the Scotch results. We liked the term whiskey webs to describe this result and decided to investigate the governing colloid science. We wondered if you could differentiate different bourbons through investigating their whiskey web patterns. Could it be used as a counterfeit measure or for quality control?

How is this both an art and a science?

It crosses different thresholds. If you show people a picture of a whiskey web, they’re drawn to it, it has vibrant color and nice contrast. When you tell them it’s a whiskey droplet, they’re intrigued and can’t just walk away. They want to know more. One of our whiskey webs was actually accepted into an art gallery in Texas in 2019 and it won the visitor’s award because people were so intrigued by it. Once people are interested, then they want to know how it formed. They ask, “What’s the science behind it?” It’s nice that it crosses all those boundaries and produces a nice story when everything is brought together.

Is it possible to identify different brands of whiskey by their webs?

Yes, but the caveat is that it’s sensitive to a fault. We found out that if the humidity changes in the lab, or if we change our water source, the pattern changes. We are working on ways of making this test robust enough to generate a consistent library, for example, such that Buffalo Trace always looks like this. Can we do it? Yes. Is it feasible to do it? Perhaps. We would have to have very precise controls in order to say “yes” to your question. We are still working on ways to make it more robust.

What is your favorite whiskey web and why?

I am intrigued by Pappy Van Winkle. It’s a sample where I have different ages – 10, 20 year variations so it gives me a way to compare and contrast. What we’ve noticed is that Pappy is one that has webs in the middle but not on the perimeter. We’ve noticed with some of our other 20-yr bourbons that the patterns only form on the interior. Why is that? What’s going on in the physics that gives us indication of age? It’s a web that looks neat, too, but at the same time there’s a science-driven reason behind it.

What research applications and new knowledge do you expect to glean from this study?

With whiskey webs, we consider it an engineering problem we are actively pursuing to get to that identification and characterization stage. One possible research application is quality control.

Will this replace high tech applications like liquid chromatography that can really get down to the molecular level? No, but once we get that portable robust testing methodology panned out – could it be used for a quick drop quality control? I think so. From a counterfeit perspective, it might work to tell us if it is bourbon or not. You could take moonshine and add colorant and call it bourbon, but we have found if it is not a bourbon, it won’t create a web.  Using the physics that guide this, can we apply it to other things besides whiskey? We are looking at that.

People are interested in creating a whiskey web for their personal favorites so we’re also working to develop an at-home kit. The challenge is to get the light just right, and not everyone has access to highly filtered water. While you need a microscope to get a really good artistic image, you can actually visualize a web with your smart phone at home. We have a kit that can make that happen.

Doing outreach and education on this has been great. Whiskey webs was one of the display projects in Washington, DC in spring of 2019 selected to present to the Smithsonian. 60,000 people viewed it at the ACCelerate Festival.  Outside of Kentucky, most people don’t know what bourbon is. They think it’s just whiskey, so it’s great educating the public on what bourbon is. The difference, in case you don’t know, is American whiskeys, inclusive of bourbon are aged in newly charred, never used, oak barrels. Whiskey webs form for any American whiskey, so for us at least it’s that new barrel that is the key to making these structures from what we’ve studied so far. (In addition, bourbon specifically, as opposed to other whiskeys, is made from a majority of corn in the grains within its mash.)

This makes for a nice evolving conversation with interested viewers – this is bourbon, this is colloid science, this is how things evaporate. We enjoy telling that narrative to whoever is willing to listen. Once the pandemic allows, we are willing to go to different local and regional events to have people talk about science, talk about bourbon, talk about art, all of the above.

That’s one thing we’re excited about and looking forward to doing in the future, as well as, of course generating proposals and scientific ideas and trying to get the fundamental science going at the same time.

For more about the science of whiskey webs, visit Stuart’s recent article in Physics Today.