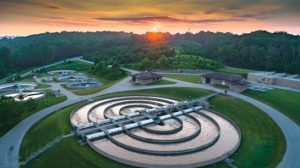 The J.B. Speed School of Engineering master’s student was outside in the summer heat, filling 500-gallon tanks with potable reclaimed water at the Metropolitan Sewer District’s Floyds Fork Water Quality Treatment Center. The four tanks were heading to four Louisville craft breweries, where the water would be used in some new brews as part of a pilot project.

Shipman, 22, knew better than just about anyone that it was ready to drink. So on that hot July day, he took a couple of gulps.

Shipman is one of 20 University of Louisville Speed School students who had a part in the water pilot project, which has been named Next Round Brewing (motto: “Good as New, Great for Brew”). He is using the project for his master’s thesis. 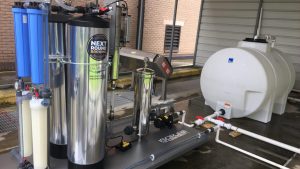 Next Round is a joint effort among UofL, MSD, Louisville Water Co., the breweries, the Kentucky-Tennessee Water Environment Association, the Kentucky-Tennessee section of American Water Works Association and Isopure Corp., the world’s leading manufacturer of FDA-registered equipment for dialysis water treatment, which built the purifier. The goal was to find a way to turn something no one would consider drinking into something everyone would want to drink.

Milad Ebrahimi, a Speed School doctoral graduate who works as an MSD regulatory compliance analyst, had the idea about a year ago. He proposed a capstone project for seniors in the chemical engineering department: What are the best ways to remove enough contaminants from treated wastewater to make it drinkable?

Five teams of four students each took on different challenges for the small-scale wastewater treatment system, including experimenting with chemicals and filters, adding copper ions and water softeners and zapping the water with UV light. Ebrahimi and his team took the best ideas from each student group and incorporated it into Next Round’s water purification system. 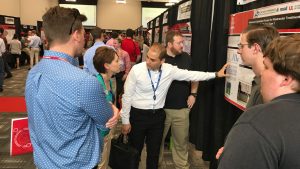 “This process is not fast,” Shipman said. “But quality and safety is not to be rushed.”

An informational video about Next Round emphasizes that the amount of water on Earth is finite, and parts of the world are already struggling with the demand for clean drinking water.

“Inspiring and promoting dialogue about diversifying our nation’s water portfolio is an important part of a national water strategy,” Ebrahimi wrote in an article describing the project.

The four breweries — Gordon Biersch, Holsopple Brewing, Akasha Brewing and Apocalypse Brew — will serve their beer Aug. 18 at Louisville’s Waterfront Park during the Water for Life celebration of water event sponsored by the Water Professionals Conference.

“The source isn’t really quite as important as what comes out,” said Nick Landers of Gordon Biersch.