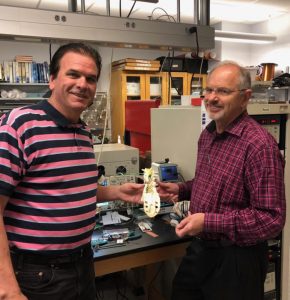 A University of Louisville technology for measuring strain on the spine has received a first-of-its-kind approval from the FDA.

The technology is the first FDA approval in a new category for products used during spine surgery that have both mechanical and electrical components.

The device, patented through the UofL Commercialization EPI-Center, consists of a series of strain sensors placed on the titanium rods, which are implanted into the body to hold the vertebrae in place after a spinal fusion surgery. Spinal fusion, which “fuses” vertebrae together, is usually done to reduce pain.

The device can help doctors see whether the spine is solidly fusing after the surgery. The sensors measure the strain on the rods, which indicates the level of strain on the spine.

Currently, the only way to determine that is through an additional exploratory surgery, said Dr. John Naber, a UofL professor who worked on the technology. But the UofL-invented system allows doctors to determine that from outside the body.

“The big payoff is to eliminate unnecessary surgeries,” said Naber, who also is associate chair of electrical and computer engineering.

According to a 2019 article in the journal Spine analyzing lumbar fusion rates, about 200,000 spinal fusion surgeries are performed every year in the U.S. And, the number of elective fusion surgeries has increased by more than 60% since 2004.

The technology is now marketed by Ohio-based Intellirod Spine Inc. as the “LOADPRO sensing system.”

Ric Navarro, CEO of Intellirod, said the company plans to commercially launch the product at the Cleveland Clinic and the Leatherman Spine Center in Louisville now that it has FDA approval. The company plans to expand its launch sites in the near future.

“We are delighted to be the first device in this new FDA product category for spine to give the surgeon unprecedented new information about how much strain is on their rods as they correct a deformity,” he said.

Listen to a radio interview with Naber on UofL Today with Mark Hebert.