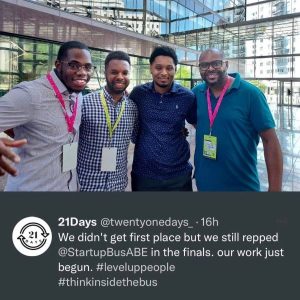 For this Startup Bus, Turner reported the development of four startups in three days. “We were able to pitch to investors in Cincinnati, Louisville (At Story Louisville with Amplify), Indianapolis, Chicago, St. Louis, Tulsa, and Austin,” she said. Three of the teams made it to the semifinals and one to the final round competition in Austin.

Abraham Gidey, Isaiah McFarland, and Yoshi Ajagbe were three Speed school students aboard the bus. McFarland and Ajagbe are two co-founders for Yoyage, a travel app that works with your budget, which won the mini pitch competitions in Chicago and St. Louis. Gidey is the Chief Technical Officer (CTO) of 21 Days, a gaming app that rewards you for working out, which won Top Gaming Startup in the final competition amongst all competing teams.

A sophomore Computer Science student, Gidey didn’t know exactly what to expect when he signed up for Startup Bus, but he said the whirlwind experience of eight cities in five days and pitching for investors was a bit “surreal.” Contacted through Linked In by Meagan Turner, who was recruiting Black engineers from Speed School, Gidey was intrigued by the unique experience offered by Startup Bus.

“There are not many things like Startup Bus where you start a company on day one and on the fifth day, you’re asked to pitch it in front of a group of very successful investors and entrepreneurs,” said Gidey. “I got to make great connections with people I met along the way in Chicago and Oklahoma, people I wouldn’t have met just being in Louisville,” he said. “It was a very valuable experience for that, and just in terms of things I learned about myself as a person.”

Gidey’s startup, 21 Days, was accepted into an accelerator program that was awarded to the top five startup companies from the bus. Known as LAB (Life after the Bus), the program provides guidance to startups and gets them connected with other successful companies who’ve gone through Startup Bus.

“Instacart was actually started through Startup Bus,” said Gidey. “In Austin, we met with the company’s founders, who told us the story of how they came up with their idea,” he said. “I recommend this experience to anybody who has any dreams at all of owning their own business. Startup Bus has been a great experience I’ll never forget.”

Having access to opportunities like Startup Bus through Speed School has helped Gidey find his path and his tribe. “There are so many people who are like-minded individuals here,” he said. “It’s always easy to reach out. No matter the issue, I feel like there is always somebody I can talk to and I appreciate that.”

On September 19, during Startup Week, Gidey also participated in Black Founders Experience Panel with Meagan Turner, Jade Brown, another UofL Startup Bus founder; and two other Louisville-based, Black tech founders. “People of color have always had to fight adversity in the startup space,” said Gidey. “When it becomes a community of other people of color working on their own startups, it builds a better sense of belonging.

When you see someone the same color as you, who has had the same struggles as you, and they’re successful, it gives you confidence in yourself, “he said. “If they can do it, I can do it.”