Opportunities to apply knowledge gained in the classroom and laboratory before graduation are treasured. To do so half a world away is part of what makes the student experience at UofL unique.

A group of students and faculty members from the University of Louisville’s Conn Center for Renewable Energy Research did just that through the Solar Decathlon Middle East competition in Dubai, United Arab Emirates during 2021.

The event, the largest solar decathlon competition for international universities, featured 14 international teams and took place Oct. 20 to Nov. 21 at the Mohammed bin Rashid Al Maktoum Solar Park in Dubai. Over the last 2 years, teams designed and built high energy-efficiency, grid-connected, solar powered houses, which were set up together in a public showcase village during the World Expo. 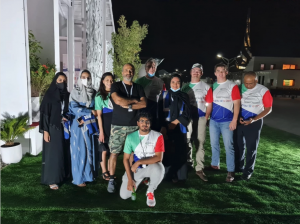 UofL teamed up with Higher Colleges of Technology (HCT), American University of Sharjah (AUS) and American University in Dubai (AUD) to form “Team Desert Phoenix.” The team fused talents of faculty, staff and students from all four universities to design, build and compete with a state-of-the-science 1,000-square-foot house. UofL’s Conn Center for Renewable Energy Research spearheaded this effort to promote the use of renewables, create the energy efficient house and involve over 10 faculty and 70 students in a truly international cooperative effort.

Each university provided expertise in engineering, architecture, water conservation and treatment, and project management during the design phase. Teams were challenged to work collaboratively to meet the competition deliverables, which included innovative engineering and architectural designs, construction management, and promotional media, websites and videos.

The students worked side by side with their professors and each other to transform designs and theories into fully functional solar powered homes based on the competition’s seven pillars: sustainability, future, innovation, clean energy, mobility, smart solutions and happiness. With GE Appliances/Haier as one of the sponsors, the Team Desert Phoenix house featured Haier washer and dryer units and a top-mount refrigerator, and made it possible for the team to travel to UAE for the competition.

“This project enabled broad exposure for Conn Center for Renewable Energy Research and University of Louisville in UAE and the Middle East,” says professor Mahendra Sunkara, director of the Conn Center. “Through this effort, many universities in the region have a greater appreciation for the University of Louisville’s faculty and students in terms of the quality and academic leadership. We created an impactful experience while fostering future collaborations and exchanges, especially for those interested in our Master of Science and Ph.D. programs.”

Cole Kidwell, a sophomore electrical engineering major, said the experience of working in a multi-disciplinary, international team was a reward in itself. Cole was inspired by getting to work with people from around the world toward a common goal.

“The experiential learning is invaluable,” Kidwell said. “Specifically in my field, we are taught to design and analyze solar systems. By participating from design through construction, testing and operation, I understand how all the parts work together in a more tangible way. I learned firsthand about power distribution in a solar powered home, but also how teamwork is needed to realize every project.”

New cultural experiences and making new friends added to the learning in a meaningful way.

“The experience featured our interaction as a team,” said Grace Bank, a master’s degree student in structural engineering. “We would not have succeeded in completing the home without working together. I gained experience in communication, teamwork, and maintaining a positive environment under pressure. I also enjoyed figuring out real life situations in a foreign culture. Most of the issues we encountered are not presented in the classroom and can be more challenging to solve than the hardest equations we learn. Struggling helped me take a step back, evaluate the situation, and decide the next move to make. Nothing could be predicted, so it was nerve wracking and thrilling at the same time.” 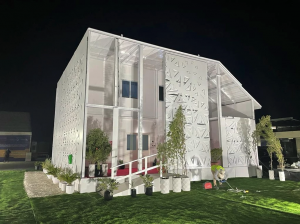 Bank said the students came together under the stress of the build phase. They learned to work in a “real-world situation with a real-world budget,” but getting the house constructed on time and competing was a triumph. Overcoming project management challenges created a powerful bond among teammates.

“Team Desert Phoenix was recruited late into the competition,” Kidwell added, “and had a full year less time to design and complete our home. We rose to the challenge, including maintaining a rigorous virtual international presence with teammates in UAE. Our team worked very well together to overcome because we had a large student presence on site that was not afraid to put in manual labor and long hours to see the project to its finish. I am very proud to have been a part of a team with this level of determination.”

Out of eight teams that completed their projects, Desert Phoenix took seventh place in the competition. The UofL students and faculty were in Dubai for about two weeks in November for the last part of the build phase and the competition phase.

“Our biggest accomplishment was definitely finishing the house,” said Ximena Flores, a sophomore chemical engineering major who was part of the team. “This opportunity also introduced me to the Conn Center in a capacity that I had not known before. I look forward to potentially working on future Conn Center projects.” Flores said she and her fellow students also had time to tour a bit and saw “some incredible places like Dubai Mall, the Burj Khalifa (skyscraper), the Sheikh Zayed Grand Mosque. On our last day, we were able to go to the beach and swim for a few hours.”

Meghan Gregonis, the U.S. Consul General in Dubai, was one of the dignitaries who toured the house. She noted UofL as the competition’s sole US participant and emphasized the partnerships with the American Universities in Dubai. The Counsel General expressed her pride in the students, their teamwork and the house at a time when sustainability bears on mitigating climate change.

“The logistic agility required to perform in this competition is intense,” remarks Marsh, who oversaw the communications aspects for the team. “The solar decathlon experience challenges students to rise to the speed of business. To succeed, they must apply knowledge from the classroom yet bring focus as resilient people. We are incredibly pleased with the performance of the entire team, especially the commitment and leadership shown by students from UofL.”