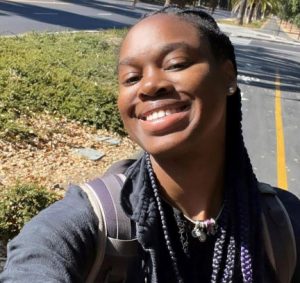 Meagan Turner went from a passenger on the bus to a driver in just three years. That would be the StartupBus, which began in 2010, a five-day tech boot camp and startup pitch competition that invites would-be entrepreneurs to take a road trip/crash course in all things entrepreneurial. In a few short days, “Buspreneurs” pitch an idea, quickly moving to research, building, testing and actually selling the product or service.

In 2019, the Speed School electrical engineering student was invited to ride the StartupBus from Akron to New Orleans, but next month will be the lead conductor of the competition’s Advancing Black Entrepreneurs (ABE) bus. From July 27th to the 31st, she will be a coach and leader for 30 aspiring Black entrepreneurs as they travel from her Cincinnati hometown to Austin, Texas.

Turner graduated high school in 2015, not completely clear about her educational path, but initially pursued international business and finance, following her mother’s path to corporate America. “But that just wasn’t me,” said Turner.

It took dropping out of school and spending time in her hometown with her grandfather to steer her in another direction. “I hadn’t really spent much time with him and he was the only engineer that I knew of in my family,” said Turner. “Once I started talking about things that got me excited,  engineering came into the conversation and I thought of electrical, because I always enjoyed knowing the electrical parts of how something is built, like toys,” she said. “It was always gadgets or anything that you can kind of physically interact with and involves an electrical component, and so that’s what I wanted to spend time studying.”

In the next year and a half, Turner was anything but idle. She started by picking up prerequisites she would need to study engineering at a satellite location of University of Cincinnati. Outside of school, Turner’s independent study and proactive networking included a total immersion in the tech community. “I had freedom and time and I joined many tech-related groups and listened to podcasts,” said Turner. “I learned about the StartupBus from a Facebook group I joined called Hackathon Hackers, a group who are interested in hackathons and coding and creating projects.”

For more preparation for engineering school, Turner sought out travel scholarships for tech conferences, including one to San Diego that introduced her to the world of big tech companies and to computer science students. “The conference was all about accessibility in tech and providing for minorities,” she said.  Turner, who admits she suffered a bit with “imposter syndrome” when she first began exploring the field, said, “It was there when I first felt that maybe I could do this. I could get into engineering.”

The student experienced another major milestone in her quest when she connected online with a Google employee, Don Gerstle, an electrical engineering alum of Speed School, who offered to mentor her. “Don has been amazing, and I’ve gone out of my way to find University of Louisville alumnae who work at big tech companies, because I think a lot of students stay local, but I need to see everything.”

Turner’s insatiable curiosity and initiative was noticed, and she was invited to the StartupBus in 2019. “I talked to everybody on the different teams in the different buses so I could make it a positive experience and learn as much as I could about business development and startups,” she said.

“I was on the Ohio bus, but the Advancing Black Entrepreneurs bus in that year, they left from Harlem, New York, and there was just something to say about the startup ideas generated on that bus,” said Turner. “They were more about building their communities, like financial literacy for minorities, for example, things that can really influence their communities,” she said. “When those different, like marginalized groups, have access to technology and education, a lot of the times that’s going into positively impacting their communities. “That’s what I like about technology specifically for Black and brown communities is that it’s a tool to build those communities.”

From mixing and mingling with others from the Florida bus and the DC bus, Turner said she ended up spending time in the last stop city of New Orleans, where she met directors of StartupBus Europe and StartupBus Africa. “It was that networking that led to how they knew me to include me and ask me about leading the ABE bus this time,” she said.

“The other conductors on the bus and me want to make this an amazing experience for riders. I am still actively recruiting to get University of Louisville students involved as well,” she said.

Being immersed in the start-up experience is a great way to learn and network, said Turner. “There are people on the bus to be mentors and help with technical things and people with startup experience on the bus to help them develop their business model,” she said. “Hopefully, they’ll learn a lot and be able to build something that they would want to continue after the bus.”

Going into her junior year, Turner said she is getting more comfortable at Speed School, where she applied in part to be close to her mother, who lives in Louisville and works at Humana. “I was really nervous when I started here,” she said. “I started taking the bus in the mornings and getting to campus really early and just hanging out on the engineering floor. I thought if I stay in this place long enough, it’ll feel like home.”

Meeting Institute of Electrical & Electronic Engineers (IEEE) president, Nora Schimpf helped with that. “She gave me really helpful words of encouragement, showed me where the IEEE room was so I could go in there, and gave me some of his old books and materials, which was really nice. Having somebody like her and just being able to meet, friendly faces on the floor, kind of gave me confidence that I needed.”

Turner co-oped at GE Appliances, and was a student worker for FirstBuild, the GE Appliances start-up. She said the best part of her Speed School experience so far has been getting involved in

The National Society of Black Engineers (NSBE). “Representation is important,” said Turner. “Before I went to Speed School, I developed a great network of Black and brown computer science students at these tech conferences. Being able to find that where I’m going to be spending most of my time at school is important to me, too and NSBE is a great avenue for that,” she said. “It helped me find other students that look like me and made me feel comfortable.”

Turner found another way to identify herself in tech in what might seem to be an unusual space. “I discovered a Marvel comic book character that I felt is me,” she said. “Her name is RiRi Williams, and she’s a black woman who replaces Iron Man, and she has this whole storyline where she is from Chicago and she studied electrical engineering at MIT,” said Turner.

“When I first saw that I got super excited,” she said. “I got posters, I got the comic book, and it definitely made me feel more confident. I like the representation of what technology can inspired for people like me.

Turner said she is currently uncertain what her plans are for post-graduation. This summer, she is completing an engineering class remotely while interning in San Francisco for a battery management company for electric and hybrid vehicles. “I’m kind of collecting information and see how I like it out here,” said Turner. “I mean, Silicon Valley is supposed to be the tech hub, so I want to see what’s out here.”

Despite her current career path, Turner admits she has a love-hate relationship with tech. “It can bring people together, but I’m also an outdoors person who likes hiking and paddle boarding,” she said.

“On the one hand, it’s bringing education to people for free, but sometimes technology can keep us from being present and thinking that we always have to compare ourselves or stay up with the latest new thing,” said Turner. “There’s something to be said for being able to disconnect, and just being happy with what you have and being present and able to enjoy life.”