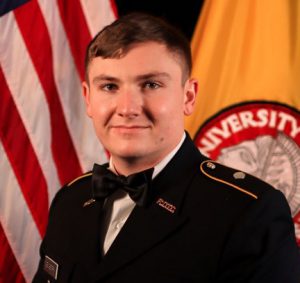 Two major accomplishment in two days. That’s what is happening for Jacob Newberry as he is commissioned into the U.S. Army National Guard on May 7th and the very next day, graduating with a Bachelor’s of Science degree in Mechanical Engineering from Speed School.

Growing up in Northern Kentucky, Newberry excelled in math and science and by senior year of high school, he knew he wanted to pursue mechanical engineering.

“I was always very hands-on as a kid, and when I toured Speed School, I was really impressed,” he said. “I also knew the school had a great reputation for engineering.”

Like many freshmen, Newberry struggled in his first semesters with the tough calculus requirements, but learned to improve his study habits and began to do better. When the pandemic arrived, that added a new wrinkle.

“It’s been tough, especially since COVID,” he said. “Learning engineering over the computer is not easy. It’s been a real test of my work ethic, but the challenge of Speed School has really pushed me to see how good I can be.”

Having a cohort of engineering friends to support one another through Speed School made a big difference, said Newberry.

“There are three or four roommates who are a good mix of disciplines, and it helped us all to cope knowing everyone was taking a calculus test every week at 8 a.m.

“Speed School made me a better person by throwing problems at me and having to work really hard to understand, and to persevere on the path for four to five years,” he said.

Newberry didn’t learn about the UofL ROTC program until he was a couple years into his academic degree, but when he did, the ROTC office helped him find a way to fulfill both his desire to be an engineer and to serve his country.

“My dad was in the Army, and he has always been an idol of mine,” said Newberry. “The option for me to do both ROTC and engineering was really exciting because I always wanted to serve, even as a young kid,” he said.

After commissioning, Newberry will spend eight years in the National Guard, with duty one weekend a month and two weeks during the summers. He has been assigned to 138th Field Artillery Regiment in Louisville, and will be an ordinance officer and platoon leader. The primary duties of the ordinance branch is to provide maintenance and munitions branch support for other combat arms branches of the army.

As for the civilian side, Newberry plans to seek work as a mechanical engineer in manufacturing in Florence, a Northern Kentucky industrial hub near where he and his girlfriend are buying a house.
The mechanical engineer said the military and engineering have complemented one another well.

“One made me better at the other,” he said. “The curriculum in engineering is harder and ROTC has been more character and leadership-building, but both have been challenging in their own respects.”

Newberry said he would highly recommend the dual path he has taken to anyone who is interested.

“The ROTC program at UofL is absolutely phenomenal. At a recent competition at West Point, they won 7th place out of the whole nation,” he said. “Both Speed School and ROTC offer so much value,” he said. “One teaches great soft skills and one great technical skills. It really sets you up for a successful career whichever path you decide to go.”