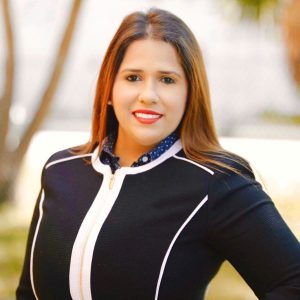 Paola Leon Alburjas, who is pursuing her online Master’s in Civil Engineering at Speed School has been honored with the “Young Engineer of the Year” by the Cuban American Association of Civil Engineers for her outstanding contributions to the engineering profession and the community. Currently, Alburjas is a Traffic Engineer at the Miami-Dade County Department of Transportation and Public Works, where she manages a huge county that encompasses seven cities.

A native of Venezuela, Alburjas immigrated to the United States in 2011.  She credits her interest in engineering to her grandfather, who was a captain in the military and an engineer on oil ships. “Since I was a child, he taught me math, science, astronomy, and he knew five languages,” she said. “As a child, I didn’t play with dolls or other normal toys, I was always drawing.” Alburjas, who said she was always fascinated with buildings and roadways, wanted to study engineering on her own in her home country but all the textbooks were in English, so she knew her first task was to learn the language.

After moving to Miami and two years of English language study there, she completed her AA degree at Miami-Dade College, while working full-time in the private sector. She transferred to Florida International University and completed her BS in Civil Engineering with a specialization in Transportation Engineering. While completing her degree, Alburjas joined the American Society of Civil Engineers (ASCE) and the Cuban American Association of Civil Engineers (C-AACE). Through her membership, she pursued community service opportunities such as tutoring and providing engineering lessons to elementary school students in basic bridge construction techniques.

After completing her BS degree, Alburjas wanted to go to the next level and pursue her master’s degree because her future goals include teaching. “I want to be a professor in the future, and of course learn more about my career that will help me to be the best,” said Alburjas. With a demanding, full-time career working for the city, she knew she needed a 100% online program with flexibility, and she wanted to continue to focus on the transportation sector and traffic engineering, specifically.  She found what she needed at Speed School.

“I found more classes related to real life and what I do at work – redesign of highways, intelligent transportation systems, etc. This is what I like and I want to learn,” said Alburjas.

The flexibility of asynchronous learning made it feasible for Alburjas as well. “Basically, you can set your own schedule, and on your own pace,” she said. “You have the ability to say, ‘Ok, I’m going to work on this project on the weekend. You don’t have that option at another university because they will tell you to submit a project at 2 p.m. on a weekday, and that’s just impossible for me.”

Alburjas also noted her Speed School advisor, Civil Engineering Professor Brandon Shelley, is a working traffic engineer, who can offer practical experience for her daily work life. “The fact that he’s working in the field and can tell me, ‘You will need this in your job right now,’ and can teach me what I need to know, which is great, because every day at work is something new,” she said. “I really like the interaction I have with my professors. It’s pretty awesome.”

When she was seeking a school for her master’s program, Alburjas said she also found Speed School affordable, and felt like it held prestige. “When I did my research, I found UofL had one of the best engineering programs in the country. That’s important when you’re looking for a job,” she said.

In fact, Alburjas said she visited the UofL campus last September and did her own tour, snapping a selfie with The Thinker sculpture like many other students have done over the years.

She is considering a move to Louisville for her PhD at UofL as an option for the future.

“Whenever I tell anyone about University of Louisville, they say oh, you’re a Cardinal, and I love that. I’m very happy with my choice. I’m a proud Cardinal fan.”

As the Young Engineer of the Year recipient, Alburjas said at this point in her career, she is most proud that has worked for the government in a job that is doing something to help the community. “As a traffic engineer, I am working to making the roads better every day, and that saves lives. That’s the most important part of my job.”