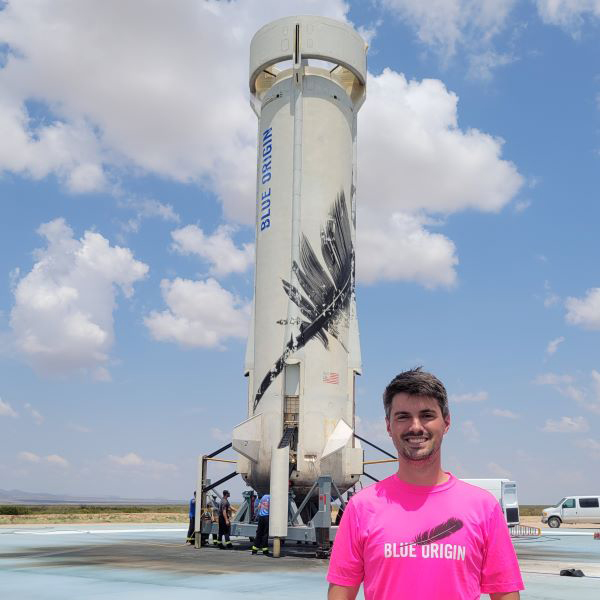 Engineer and Speed School alumnus Gregg Blincoe (Mechanical Engineering, ’15) remembers how he stayed up late the night before his first co-op assignment began at Speed School. The Mars Curiosity Rover was in the final stages of landing in the wee hours on August 6, 2012, and he was watching in wonder.

“I saw the live stream headquarters in NASA and it showed all these engineers losing their minds seeing the landing of the rover on Mars,” he recalls. “I said to myself, ‘Now that’s what I want, to have that feeling of elation and that passion for something you’ve spent years of your life working on.”

Now employed at Blue Origin, the space flight company that made history with its July 20, 2021 human flight to the edge of space with four civilian passengers including Amazon founder Jeff Bezos, Blincoe has seen that long-ago career inspiration come to fruition.

For the last five years, Blincoe has worked for Blue Origin as a structural engineer along with three other Speed School alums (Celeste Atchison CHE ’18, Matt Cosgrove ME, ’19, Nick Greco ME ’13). As ground support for the New Shepard program at Launch Site One near Van Horn, Texas, Blincoe works on everything except the rocket itself including maintenance platforms, lifting equipment, tooling, and structures to react engine testing, for example.

“One thing unique about ground support is I’m not just working on one small part of the rocket,” said Blincoe. “My job interacts with every department, for instance if avionics needs access to panels, we build platforms or ladders for them.” Ground support not only builds things to maintain the rocket, but also designs the launch facilities such as the launch tower, launch pad and landing pad. “We work on all that infrastructure; it’s a large net we cast,” said Blincoe.

Blincoe credits his Speed School experiences, and specifically his involvement on the River City Rocketry team and its NASA Student Launch program, with his initial interest and subsequent passion in the space industry. Colleague and former classmate Nick Greco introduced Blincoe to the River City Rocketry team and passed the leadership mantle to him to be co-captain of the rocket team during Blincoe’s final two years at Speed School. In Blincoe’s first year as co-captain, the rocketry team who competed in the NASA Student Launch program won third place in the competition, and second place the subsequent year while Blincoe was captain. While placing second the team also won the “Vehicle Design Award”, “Project Review Award”, and “Safety Award”.

Blincoe said the cool thing about the NASA Student Launch program was how it prepared him for his career at Blue Origin. “We were forced to go through these different design review processes: preliminary design, critical design and flight readiness. You write up these 200-400 page documents and give 45-minute presentations to NASA engineers walking them through the design for your rocket and ground support from conception all the way to how we will verify it for flight,” said Blincoe.

“To have this long term project with this team of excellent people from a diversity of backgrounds and this idea that there’s this common goal and daily mission to get to the final configuration and ready for launch – that where’s I really caught the passion.”

Blincoe said support from the Speed School administration also enabled his and other students’ ability to reach beyond the classroom. “When we showed our real interest in the rocket team and began to show performance, they stepped up with financial backing and expansion to support growth, like today’s state-of-the-art Engineering Garage, which was just ramping up when Blincoe left UofL. “They are supplying students with tools and lessons where I am just blown away,” said Blincoe.

The engineer said that while today’s engineering students might not immediately think of UofL for aerospace, it’s viable because of the many places engineering degrees can take you. “As a structural engineer, my first thought wasn’t a rocket company. But UofL opened doors for a few of us to get into the field that when we started at UofL, we weren’t thinking we could or would get into.”

Blincoe said one of the slogans at Blue Origin has been “Launch, Land, Repeat,” and now that they have reached that milestone of the first human flight, it is about repeating. “There is a lot on the horizon with the company, including more regularly scheduled ventures to space,” he said.

Amazon and Blue Origin founder Bezos has said the goal is for millions of people to be living and working in space. Does Blincoe think we will realize that dream?

“Bezos commented in an after-launch interview and compared space flight to the history of winged flight,” said Blincoe. “Right now, we are at the stage where the single prop plane is coming out of the barn, but look how far that has come to today. We have 737 jets. We are just at the beginning stages and anything is possible.”

What is next for Blincoe’s career in the space industry? “For me, the biggest thing is to make sure whatever I do next, I am able to keep that same feeling I had when I watched those engineer’s faces when Curiosity landed,” said Blincoe. “I’ve been fortunate at Blue to be a part of almost every launch, and feel that elation seeing the rocket launch and come back down with my own eyes,” he said. “It hasn’t gotten old yet.”