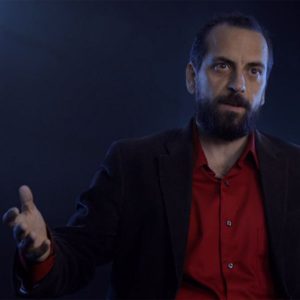 When director Leanne Pooley decided to make a documentary for Universal Studios about Artificial Intelligence (AI), her intent was to cull from the world’s leading AI scientists to get their views. In that top echelon of AI researchers, she sought out Roman Yampolskiy, Associate Professor of Computer Science and Engineering, to be a featured speaker in the documentary.

“We Need to Talk About AI,” which launched on Amazon Prime in the spring of 2020, is an informative and intriguing 75-minute documentary that discusses the present and future role of artificial intelligence in society and the accompanying ethical questions. As an expert in the field, Yampolskiy, who filmed his commentary in Louisville with a visiting Hollywood crew, provides commentary in the film eight times. He said he was “given freedom to accurately express my best guesses about the future of AI – both beneficial and not so beneficial.”

Yampolskiy said he was impressed overall with the quality of the documentary and advisors and experts involved. “Most movies like this just want to show the most visually pleasing images, but this was very factual and represented all points of view; from very concerned about AI, to somewhat concerned to not concerned at all,” he said.

It is generally acknowledged that AI does represent beneficial advances in its contribution to data science, medicine and more. But to the general public, the somewhat malevolent spectre of seminal films like “2001: A Space Odyssey,” with the frightening scenario of a computer’s refusal to follow human orders, and the apocalyptic vision of “Terminator,” with its deadly weaponization of robots, looms large.

In fact, “We Need to Talk About AI,” features conversations with directors from both those films, including James Cameron, who directed not only “Terminator” but other blockbusters like “Titanic” and “Avatar.” Cameron’s philosophy about AI is that the technology is not intrinsically problematic, but of course will only function as its highly corruptible human “parent” tells it. “If it’s a business parent, we have to worry about money and it teaching greed. If it’s military parents, it could teach it to kill,” said Cameron.

What may seem frightening about Artificial Intelligence, said Yampolskiy, is the sheer intellectual capability that the technology represents. “If you imagine someone not having a PhD in one area, but in every conceivable area at once; that is what we are talking about. They can do things no one else is capable of.”

The documentary references a term in the AI lexicon known as “singularity.” Yampolskiy explained it as the moment robots begin upgrading their own software and transcending humankind. “There becomes a point where it gets as good as we are – it could do science and engineering research itself, but since it’s a lot faster than humans and doesn’t need to sleep or eat, it starts this cycle of technological improvement where the next iteration of AI is made very quickly, and then the next one and next to the point where we cannot keep up with it, and no longer understand what’s going on,” he said.

For example, in the film “2001: A Space Odyssey” the machine known as “Hal” disobeys the human giving it orders because its prime directive was to make the mission succeed, and that success meant the death of the humans involved. “So if you tell a robot we want world peace,” said Yampolskiy, “that may equal the annihilation of all humans. Obviously, it would be completely unethical to try to develop such a machine.”

That’s why the researcher said a primary concentration for his present research is working on this issue of control. “We are trying to understand what is possible even in principle, not just in practice in terms of what kind of control we can achieve,” he said. “Is it direct control? Is it more like an advisory role? We are basically trying to address the question of the movie. If we are in control with proper orders, AI is very good technology to have,” said Yampolskiy.

The questions AI presents are weighty ones. “From Big Bang until now, this is the only time a person can steer the future of our whole universe,” said Yampolskiy. “Maybe we should worry that us humans are not wise enough to wield this much power. If you study theology, one thing you learn is it is never the case that God successfully manages to control its creation. I think it is important to honestly discuss such issues. Nobody knows when, but it doesn’t really matter if it’s ten years or 100 years, the problem is the same. It’s real and we need time to solve it. We only get one chance to get it right. If you screw it up, possibly everything is lost.”