Edward Jenner learned early in his medical career of the farm worker’s’ belief that if at one time one had cowpox, one would not get smallpox. Cowpox caused mild discomfort, aching, a few pustules, some swelling, symptoms that disap 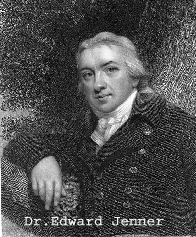 peared in a few days. In contrast, smallpox was a scourge.  It infected whole population centers throughout the world. The pustules of the disease caused massive disfigurement, in its worse case blindness, and in many cases killed its victims. Populations of towns and villages could be decimated. As recently as 1967, ten years before the successful efforts of the World Health Organization to eradicate smallpox by isolation and vaccination, two millions persons died of this disease.

Prior to the discovery of vaccination by Jenner, protection against a severe or fatal case of smallpox was generally achieved by giving subjects a mild (it was hoped) case of smallpox by inoculation of the smallpox virus. The introduction of this operation to England is credited to Lady Mary Wortley Montagu who noted that this was widely practiced in the Orient. This approach, termed variolation,  was difficult to control as the severity of the induced disease was hard to predict. Worse, such subjects, even if not debilitated by the inoculation, became carriers of the disease and contributed to its further spread in the community.

Working by himself with his own financial resources, Jenner, a successful practicing physician, collated cases of subjects who had suffered from cowpox and were subsequently immune to smallpox. His thesis “that the Cow-pox protects the human constitution from the infection of the Small-pox” was tested by vaccinating patients with fluid from pustles of cowpox-infected patients and then showing that these subjects were immune to smallpox. Equally important, he showed that the cowpox vaccine “in passing from one human subject to another (arm-to-arm transfer)… lost none of its protective properties”. His first subject for this treatment was James Phipps, an 8 year-old boy. This was a critical observation as it made it possible to obtain a continual supply of vaccine – this because cowpox infection in cows was sporadic and rare.  Jenner wrote up his study and in 1797 submitted it for publication in the Philosophical Transactions of the Royal Society which  found the work preliminary and returned the paper with no comment. Jenner added additional cases and paid a printer to publish Inquiry. Two addenda entitled Further Observations followed in 1798 and 1799. A third addenda, Origin of the Vaccine Inoculation followed in 1801 (see below).

Inquiry was a landmark contribution to the science of medicine and biology.  It established the foundations of preventive medicine and immunology and was the precursor of the work on immunity against anthrax and rabies by Pasteur and on tuberculosis by Koch more than three-quarters of a century later. In 1881, following the wildly successful and highly publicized protection of sheep with attenuated anthrax virus at Pouilly-le-Forte , Pasteur adapted the terms vaccine and vaccination for his research “to the honor and immense services rendered one of the greatest Englishmen, …Jenner”.

A facsimile version of Inquiry is offered here. You will need Acrobat Reader for access. (You may download the Reader at no charge from the Adobe site by clicking here). In order to decrease download time, the text is divided into Parts A, B and C.  Viewing will be best at “actual size”. (See Notes & Definitions page for exposition on the term virus as used by Jenner)

Three years after publication of “Inquiry”, the practice of smallpox vaccination had begun to spread throughout the world. Jenner reported that by 1801 over 100,000 persons in England had been vaccinated. Vaccination had been introduced into many countries including several British possessions, France, Spain, the United States and Canada.
Despite these successes, all was not smooth sailing for vaccination. There were many who doubted the unique ability of cowpox to prevent smallpox and opposed its practice,  suggesting, rather, that the treatment was no more than a variation of variolation. This idea was fortified by events occurring in the Smallpox and Inoculation Hospitals in London, an institution initially dedicated to variolation, that now began to practice vaccination under the direction of Drs. Woodville and Pearson. Patients treated with cowpox vaccines would develop numerous pustules, more like smallpox sores, and quite unlike the single inoculation pustule that Jenner reported. Such pustules, we now believe, were due to contamination of the vaccines with smallpox virus that infested the smallpox institution. A brisk debate between Woodville on one side and Jenner on the other caused some in the medical profession to question Jenner’s discovery.
Contributing to this questioning of the effectiveness of vaccination was the apparent use by some practitioners of exudates from unrelated infections of a cow’s udder that they assumed were cowpox (called by Jenner Spurious Cowpox). Operators using such exudates would report failure to protect against smallpox which they then attributed to failure of cowpox itself. Even when the source of the vaccine was from true cowpox exudates, some reported failures could be attributed to degradation of the vaccine through improper storage and bacterial decomposition.
Finally, there were occasional reports of individuals who had earlier been infected with cowpox who years later developed smallpox, reports directly contradictory to Jenner’s hypothesis of permanent immunity. Not known at that time by Jenner or his supporters is that vaccination against smallpox is not permanent but must be reinforced every 5 to 10 years. In addition, because of the existence of spurious cowpox, some who believed that they had been infected by cowpox might not have been.
In an effort to clarify several of these issues, Jenner published in 1801 the fourth of this pamphlets on smallpox vaccination: “The Origin of the Vaccine Inoculation”. This pamphlet is reproduced here. The copy was scanned from a facsimile copy of the Second Issue, London (coded No. 55 by W. R. LeFanu).  (Click Here for PDF file).