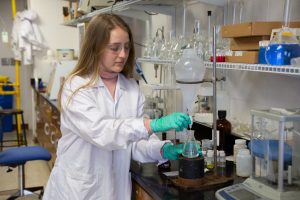 Outstanding Student and Banner Bearer Sarah Metzger has always been a loyal Cardinal fan. “I grew up in a family with season tickets to multiple sports, and my mom went to UofL,” said the chemical engineering senior. When it came to picking a college, however, Metzger considered the common saying that asserts you should go away from home for college. That is, until she toured the campus, and realized it offered the best of both worlds.

“I realized this could be my home away from home nestled in my own community,” said Metzger. “I could have a life outside my family but still be close enough for weekly dinners with my mom and go to Cards games with my dad,” she said.

While her parents are both attorneys, Metzger became interested in chemistry when she was only 10 years old after talking with her cousins. “It was the cool science, the interesting science to me, and I just became more interested with labs in high school and AP courses, where each class was more challenging than the last.”

Metzger said what she loves about chemical engineering is that everything can be broken down to a small scale but at the same time it is ubiquitous, and the questions that can raise are intriguing to her. “A chemical reaction could be with atoms and molecules too small to see with the naked eye, and it releases this much heat, but when you multiply it out, how does that change the reaction, the dynamics? she said. “What does it do in a 200 gallon tank at my facility? What does that mean for the world, the planet, the environment?”

Working to improve the environment is a zealous pursuit for Metzger, who traveled to Peru two summers in a row for international service learning trips. Peru’s ecosystem suffers with water scarcity issues during its dry season, and Metzger worked with a team to chart a more effective water conservation system. “We mapped out a canal system to travel from a massive mountain reservoir to feed down to farm plots,” she said. “Our final proposal of our paper was given to the Peruvian government to seek funding in the area to provide fixes. From an engineering perspective, it allowed me to apply things I had been learning to helping other people,” said Metzger.

In her second trip there, as a Global Student Leader, she talked with community leaders and helped get students more involved in Peruvian culture. Metzger said her two summers in the country changed her perspective on service learning. “We all have a lot to offer the world simply by supplying our critical thinking skills to solve problems, but it should be about meeting a need that the community is actually asking for,” she said. “You have to listen to what they want, not assuming you know best, and get different perspectives.”

At Speed School, Metzger has maintained a 4.0 grade point average while being a Student Ambassador since January 2018, touring prospective students and their parents through the school and providing shadowing experiences. She also works part-time as a research assistant at Arduro Sustainable Rubber, and is a Lab Teaching Assistant in the Organic Chemistry lab. Metzger is a member of the American Institute of Chemical Engineers and the Society of Women Engineers. The student said what has been most impactful about her four years at Speed has been the accessibility and support of her professors.

“I’ve talked to every single one of my professors about what path to take when I graduate, whether I go to the PhD program or start working,” she said. “All have given me their own perspectives of what drove them, and it’s been amazing. My engineer professors want you to succeed as a whole person, not just an engineer.”

Having industry experience to offer upon graduation is of tremendous benefit to new engineers in the field, said Metzger. “The co-op experience is second to none, and gives you a leg up. When you apply for graduate schools with that experience, it really puts you ahead,” she said. Metzger has had all three successful co-op rotations at Exxon Mobil.

“Co-op provides such a helpful transition to the professional world because you’re not getting coffee or making copies,” said Metzger. “You’re treated like a full time engineer. They expect big things and let you live up to the challenge. You realize you possess the knowledge and tools to succeed and do each project correctly,” she said. “The end result is you are fully prepared to be handed a project on your first day of industry.”

Metzger said she was a bit surprised when she learned she was named Outstanding Student and Banner Bearer. “I feel like I don’t always have it together like some of my friends, but I have worked very hard, and I am honored by this award,” she said. “I’m so thankful for all my professors and my family who supported me and helped me get there.”

What would the Outstanding Student say to a younger student interested in pursuing engineering at Speed School? “Be confident in your abilities,” she said. “You might think, ‘I don’t know about being here,’ but you should be here. You belong.”

The chemical engineering senior hasn’t decided which path to take post-graduation and is currently fielding job and graduate school offers. “I’m making lots of pro-con lists,” she said. “What is going to offer me the most successful but also meaningful, happy, healthy life? But ultimately no matter what I choose, I want to add to the community as much as possible. If I’m in Louisville, I want to add to Louisville, or the same somewhere else. My main goal is to contribute something where I can.”