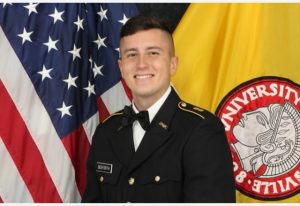 Matthew Seeforth was only in the sixth grade when he felt a call and realized he wanted to serve in the military. “It’s how I’ve always been. I knew from a pretty young age I needed to fulfill that sense of service.”

Initially more drawn to history, that changed in his sophomore year in high school when he took his first physics class. “I am so passionate about physics and understanding how things work and why they work,” said Matthew. I fell in love with it.”

Now as a Cadet in the U.S. Army through the University of Louisville ROTC program and a Senior Mechanical Engineering student at Speed School, Matthew is pursuing both of his passions with equal fervor.

Born in Nashville, Matthew said he moved through much of the Midwest in his childhood but landed in Louisville 13 years ago. His brother is a computer engineering Speed School graduate, but Matthew was more drawn to the mechanical aspects. “I needed more hands on things.” In fact, Matthew and his high school friends used to build cars in garages,” he said.

As a ROTC cadet, Matthew is considered part of the reserve force now, and once he graduates from Speed School in December 2020, Matthew will be active duty U.S. Army.

He said he thinks his Speed School experience has been a valuable asset in preparing for his military career, such as being able to work in the field through the required co-ops. “That gave me an edge up on the professionalism the military requires. The work ethic that SS instills in students has helped me as a cadet and will help me as an officer.”

Matthew’s engineering work in the army will likely be civil in nature, anything from route clearance and IED (Incendiary Explosion Device) sweeping to roadway and airway improvements. But Matthew feels prepared for any challenges.

“Speed School teaches you how to be a professional pragmatist, problem solving,” said Matthew. “That is applicable to any career, definitely in the army with the wide sets of problems that could occur. That adaptability and problem solving knowledge from being an engineering major is invaluable.”

That flexibility also came in handy on a personal level when Matthew was diagnosed with COVID-19 earlier in the year. Fortunately, he said he believes his case was mild, and so far has suffered no lingering effects. “Thankfully, I’ve not been too affected,” he said. “I lost my sense of taste and smell, and it certainly threw a wrench in a few things. Everyone has done the best they can with the cards they’ve been dealt,” he said, praising Speed School for its hybrid classes and dedication to students during the pandemic. Matthew recently donated plasma at the Red Cross.

“My understanding is a plasma transfusion may help someone else in very severe cases. I’m trying to do my bit to help on the back end of it,” he said.

Matthew said his friendships forged at Speed School are solid, and have been one of the best thing about his experience. He also praised both his Speed School professors and military science leaders for their dedication and professionalism.

“When a professor is clear and coherent, that’s all I want, but when they go above and beyond to show they care the students understand, that has been phenomenal.”

At the moment, Matthew said his future plans may include returning to school for a master’s degree after this military service, in engineering administration or maybe an MBA, or even law school for patent engineering.

If he has one message to pass on, Matthew said he hopes more Speed School students who may have an interest in the military and might need help paying for college take advantage of the opportunity. “The UofL ROTC program is amazing, and Speed School is outstanding. There are only two new cadets that are Speed School freshmen, and they will be the newest engineers since me,” said Matthew.

“I’m proud I went to Speed School, and to be an engineer, and I’m proud to serve in the U.S. Military.”