The Hearts Behind the Robots 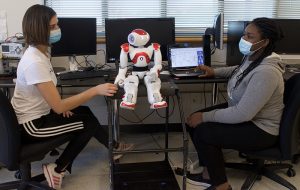 Autism Spectrum Disorder affects children’s learning and social behaviors and affects over 1 in 60 people in the United States. A LARRI research team composed of Postdoctoral Associates Nazita Taghavi and Ha Do, graduate students Prasad Nethala, Jacob Berdichevsky and undergrads Janet Pulgares Soriano, Carl Yoder, Sabrina Daisy, Jonathan Rideout, and Rebecca Castelly, have been working under the supervision of Dr. Karla Welch and Dr. Dan Popa on a NSF funded grant from the Smart and Connected Health program. This grant focuses on treating cognitive impairments in children with ASD by using our social robots Zeno, Milo and Nao. For example, Jacob Berdichevsky is working with an online dynamic time warping algorithm coded for Zeno, in order to diagnose autism severity based on human-robot imitation tasks. Carl Yoder focuses on an eye tracking system as an emotion detection tool for autistic children. Jonathan Rideout manages the connecting and testing of Zeno’s eye, head and motion tracking systems.

The clinical hypothesis of our project is that motor developmental problems, including imitation, are present and can be used in identification and treatment of ASD. The technological hypothesis is that a child-like robot with adaptive behavior can motivate children with ASD to engage in motor activities based on emotion. The robot motor cortex will adapt appropriate emotional responses and motion performance in the robot in response to the subject. The clinical hypothesis is that interaction can then be used as a vehicle for ASD evaluation, sensory-motor improvements, and learning of social skills. An investigation under IRB using approximately 100 human participants, including ASD children age 8-12, will be conducted during our four-year project at the University of Louisville Autism Treatment Center (ULAC) with Co-Investigator Greg Barnes.