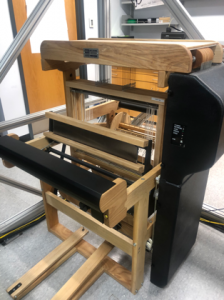 To make NeXuS a reality, multiple disciplines have come together on the LARRI team including faculty from U of L’s ECE and ME departments, including Dan Popa, Kevin Walsh, Cindy Harnett, Keng Hsu and Thad Druffel. The diverse expertise between twenty students and staff project team members is responsible for the design and assembly of the NeXuS system. Components and subsystems coordination, system development, safety solutions, electrical installation, aerosol ink-jet process development and custom pick and pack system development among a plethora of other responsibilities are conducted by our Postdoctoral Research Associates, MS, PhD, and undergraduate students. Dr. Dan Popa’s (PI), whose research background is in automation, precision robotics, and micro-robotics, works alongside four Co PIs with research backgrounds in perovskite solar cells, nanostructured thin films, wearable and textile-based devices, 3D metal printing, soft sensors multiscale MEMS devices integration and additive manufacturing.

The NeXuS will be operational at the end of 2021, and is expected to join the service tools at the Micro Nano Technology Center (MNTC, cleanroom) and be accessible to any researcher in the United States as a prototyping instrument for wearable devices and sensors and microrobots.