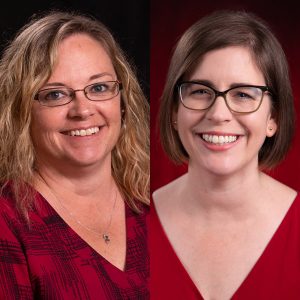 Kelly Jackson (left) and Jacqui Smith were recognized for their contributions as part of Inaugural Research and Scholarship Awards in Spring 2022.

Jackson’s job in research administration is to manage a team of four staff who help with grant proposal submissions. “We handle the submissions from the pre-award stage all the way to closeout and everything between from hiring, purchasing, reporting, all the financial aspects up until it closes,” said Jackson.

Jackson said she enjoys the fact that every day is different on her job, and she likes the problem solving aspect. “With financials, there’s a lot of mystery to it, and you have a problem you have to investigate and I love that part of it,” she said. “Also, being a part of the team in the business center and having that team where everybody can depend on one another – having their support means the world to me,” she said.

For Jackson, the most challenging part of her role is making all the pieces fit together and moving like they’re supposed to. “We recently submitted a huge university transportation center proposal through Civil Engineering with many different subcontractors, and it was very difficult to get all those pieces together, but we got that submitted at the end of August,” she said.

When she was sent the email about her EVPRI recognition, Jackson said she thought at first it was sent to her by accident. “It’s always nice to be recognized and to know that people are noticing the effort you are putting in.”

For the last six years, Jacqui Smith has worked as Research Coordinator for Speed School. In her role, she helps support research and reports on productivity. She agreed with Jackson that it was nice to be recognized and appreciated for the work she is doing. “Sometimes it is difficult getting access to the information we need, but I really enjoy digging into data,” she said.