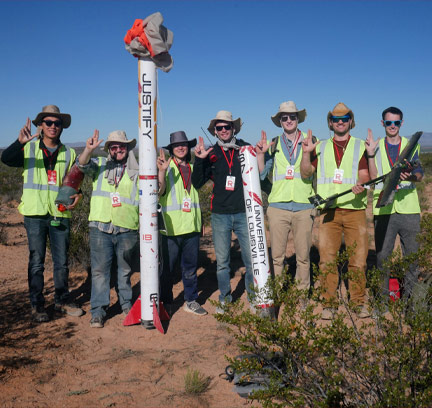 “Nil sine magno labore.” Nothing without great effort. That’s the motto of the River City Rocketry Team, a student-run organization at University of Louisville Speed School of Engineering. Founded in 2011, the team’s hard work involves spending 10 months of every year designing, building, and testing a high-powered rocket to compete in an annual collegiate level rocket launch competition; currently the Spaceport America Cup.

Unfortunately, due to Coronavirus concerns, the Engineering Garage where the team does the majority of their building has been shut down and this year’s Spaceport America Cup competition scheduled for June in New Mexico has been cancelled.

Initially, the Engineering Garage where the rocketry team does the majority of their work wasn’t getting affected.

“As COVID-19 began ramping up, things began slowly shutting down around us,” said Joellyn Ketron, a junior mechanical engineering student who is in her third year with the rocket team. “Issues started coming up like, ‘How do we get things ordered and how do we work on building processes when we can only have up to four people in the garage at a time for rocket team?” said Joellyn.

Despite the disappointing circumstances, she said the team had prepared a robust Plan B in case the competition got cancelled, or they couldn’t go because of a travel ban on the university.

“For a Level One, you have to build your own rocket with a Level One motor, which is classified based on thrust, Joelynn explained. “If it flies and lands successfully without any damages, you become a certified Level One Rocketeer.”

While building a rocket can be done on an individual basis, it’s a challenge. “The downside of not being in the garage is not having team resources like tools and epoxy – if you don’t have those things at COVID-19.

“These are uncertain times, but we are used to thinking on our feet because that comes up a lot in this hobby, so we are better prepared,” said Joelynn.

“Speed School in general has done a great job to make it where I feel I can deal with anxiety well,” said Eric. “We can lean on each other to figure stuff out. Having the social net the rocket team provides is also great because we can talk things through with others in the same situation.”

Eric said he believes his takeaways from rocketry team are plentiful and powerful, and will pave the way for future success. Soon to graduate, he has applied for the Edison Engineering Dev. Program at GE Appliances, where he did all his co-ops.

“It has greatly increased my work ethic and problem-solving ability,” said Eric. “It has given me real world situations in a context interesting to me, and tested and pushed my engineering knowledge. Because of rocket team, I taught myself to be a competent machinist, I’ve had a reason to learn new software, and I’ve had the drive to understand how every single part I’m designing is made. I can’t even think where I would be if I wasn’t on this team.”

Joelynn said the rocket team has given her a lot of experience not only working with a team but in product development. Her skills in vehicle design have earned her a co-op at GE Aviation. Also a resident adviser on campus, she said she has used her rocket team experience to promote diversity.

“It’s a way to explain that even though I am privileged for being white, I’m still in a male-dominated field where I am still trying to make differences in engineering for women,” she said.

In addition, Joelynn expressed gratitude for the opportunities the team has afforded her. “As a freshman, I got to go to Huntsville for a NASA competition and got to meet two astronauts there. Those are life-changing things a lot of students don’t get to experience unless they put the work into an extracurricular like Rocketry team.”

Eric is confident that he and other members of River City Rocketry will persevere through the current crisis. “We’ll get through it just like everybody else will. Hopefully, we can still make UofL proud when we go to New Mexico in 2021.”