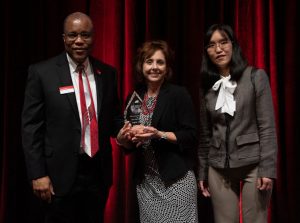 Angela Akridge was presented the Professional Award in Engineering (PAE) for Civil Engineering during the 2019 Speed School Homecoming celebration held October 25 at the Brown Hotel.

Ms. Akridge began working for MSD as an engineering co-op and upon completion of her civil engineering bachelor’s and master’s degrees from the University of Louisville Speed Scientific School, she joined MSD as a full-time employee. Since that time she has served the community through multiple leadership, management and technical positions throughout her 27+ years at MSD, primarily in the area of cleaning local waterways. Under Angela’s leadership, MSD was named the 2019 recipient of the Franz Edelman Award for Achievement in Advanced Analytics, Operations Research, and Management Science along with their partner Tetra Tech, Inc. The award was given for the use of operations research and data analytics to implement an innovative, cost-effective and sustainable clean waterways management strategy that satisfied regulatory requirements, improved overall sewer system operability and saved local rate payers approximately $200 million over the last 19 years when compared to traditional methods.

Angela was recently appointed to the newly created position of Chief Strategy Officer for Business Transformation and Regulatory Compliance for Louisville MSD by their Executive Director. A primary objective will be moving MSD from a “scramble” reactionary operational mode and into more of a proactive consistent “blueprint” operational mode and driving business transformation within all divisions of the organization. She also serves as the lead compliance officer for MSD’s obligations under the Clean Water Act, including an agreement with the U.S. Environmental Protection Agency and the Kentucky Energy and Environment Cabinet requiring over $1 billion in capital investment over 19 years and multiple programmatic initiatives to ensure safe, clean waterways for our community.

In 2015, Ms Akridge was appointed as the agency’s first female chief engineer since the organizations creation under state law in 1946. In that position she provided direction, leadership and management for the Engineering Division, along with technical direction and leadership for the organization. As Chief she oversaw the wastewater, stormwater and flood protection infrastructure capital improvement program and provided strategic direction to programs which protect public health and enhance the community’s stream water quality. She was named National Young Engineer of the Year in 2006 by the National Society of Professional Engineers and has held all officer positions, including president, of both the Louisville and state chapters of the Kentucky Society of Professional Engineers. She obtained licensure as a Professional Engineer with the state of Kentucky as well.

In her words, as she reflects on her long tenure with MSD, “What started as a one semester co-op placement quickly became a driving purpose in my life. It’s become an avenue for me to use my talents, education and passion to better the quality of life for everyone in my hometown. I take great pride and personal satisfaction in knowing that the daily work of MSD is making our community a safer, healthier city, both today and for future generations. I am humbled by the opportunity to serve my community in this capacity.”

She and her husband John, along with sons Austin and Cody, are avid Cardinal fans and reside here in the great city of Louisville, KY.