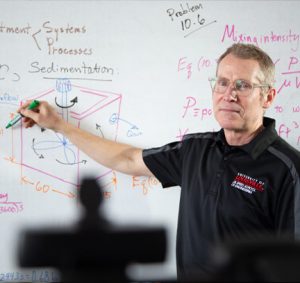 Vaccines are here. There is light at the end of the tunnel, and there is hope to begin to carve out a new normal soon. For a whole year, the world has faced massive adaptations to work, school, life. How did faculty and students on Speed School’s campus meet the challenges? We talked with one professor and student on what they’ve learned from the difficulties of the past year.

Dr. Mark French, professor in the Department of Civil & Environmental Engineering, has been a faculty member for more than 30 years. He previously taught an online graduate course for the masters of engineering program so he had trained through the Delphi Center for online instruction.

He made numerous adjustments to accommodate the transition online for students. “I started out wanting to get as close as you can replicate to regular class such as meeting at the regular class time,” said French. “I presented on the white board behind me so they could see me delivering class.”

French said there were multiple obstacles for students to manage, so one step he took was to eliminate testing and focus instead on numerous small assignments. He said it still required them to be engaged and they couldn’t get behind, but it took away some of the stress of having to interface with sometimes questionable internet connections.

“Maybe they have been quarantined at home with a bad connection or they have two other siblings also trying to get on the internet,” said French. “They can’t get the file to upload in the window of the test time, not to mention the whole mindset of a student worrying about how they are going to finish their class online when they can’t talk to all the other students in the class.”

Addressing the hands-on and team-related nature of engineering studies, French said he designed assignments so students could still do most of the work. “Last Spring’s lab class had two experiments and I would guide them by just saying, ‘turn this valve, read that gauge, etc.’ so they still do all those things to see how something works,” said French. “I tried to let them still have some thinking to do.” 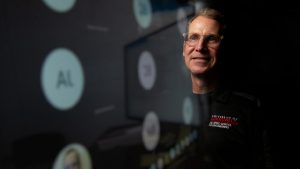 For group work where students typically compile data, do calculations and make a table for presentation, French mimicked that by holding a session in Blackboard where students joined him and they all did it together, recording it so others could do it later.

French has found that even with hybrid (in person and online) classes, many students were coming to campus for only one class, but three different days a week. It’s not surprising many chose to stay remote, and when they do, only a third to a quarter attend at the actual class time. French is now pre-recording classes and then meeting in real time at the scheduled class time to make that a forum time for questions and discussion about the material.

“It’s a challenge for all but the most motivated and organized students to keep up and have the self- discipline to watch content at the scheduled time, “said French. “All it takes is to let a couple days go by where you miss class, and suddenly you have six hours of class content to watch. It can quickly get overwhelming,” he said.

While he has encouraged students to stay on track as if they were attending class, French said he had more low grades this past fall semester than ever in more than 20 years of teaching.

“I do hear some students say they miss keeping in touch with their class and find it more difficult to keep track of assignments, but they are not contacting me outside of class to communicate their stress or status. I have to hope those who aren’t attending in real time or reaching out are getting what they want or need.”

For sophomore Civil Engineering major Aaron Hood, who takes classes with Dr. French, his learning style preference is definitely in person. When he had the opportunity, he always went to class. “I was pretty much the only one there most of the time, though,” he said.

The adjustment to online learning took its toll at first, said Aaron. “I had to learn very quickly to keep up and not let videos pile up,” he said. If you get behind, you have to cram videos you haven’t watched in order to do your portion of a group project or get ready for tests,” he said. “It’s also a lot different not waking up and going to class, and it’s easy to forget assignments when you’re not constantly reminded.”

Being COVID-isolated has made it more difficult to focus academically and emotionally, said Aaron, who had a mild case of COVID-19 earlier this year, but fortunately is healthy now.

“It’s much harder to stay motivated when you’re by yourself than when you are being pushed by your teacher and other students every day, and when you have a group of people to keep you accountable for the work you’re doing,” he said. “My advice to other students is communicate with your teams and professors to keep up and not fall behind or become apathetic.”

Though Aaron said while on campus he definitely would prefer attending class in person, COVID-19 has presented interesting new options for students. “It’s been an eye opener for most universities the freedom there is in having an online class,” he said. “You can go to class or watch a class either real time or later in the day. You can work or travel or be at home.”

As for Aaron’s future, he hopes to have his first co-op in summer 2021 with the Army Corps of Engineers. He said the opportunity to go into disaster zones after hurricanes and tornadoes is one that is appealing to him.

Until then, many more classes await his attention. Aaron said he likes Dr. French’s teaching style, pre-COVID and currently. “You’re going to get out of it what you put into it,” he said. “He doesn’t push his students to learn as much as he allows his students to learn.  The ones that are there that really want to be civil engineers? His classes are the ones where you’ll really shine.”