Speed School of Engineering has a well-deserved reputation as an academically rigorous program, and having a solid support system is key to survival, especially for incoming freshmen. Helping Speed School students deepen their connection and sense of belonging to UofL was the chief idea behind the mentoring program launched in November of 2020. Mentor Collective is a national program that partners with more than 80 institutions serving a variety of student populations to improve student success academically, professionally and personally.

“A program like this is crucial to our efforts to increase student engagement with the university, which helps increase student retention and graduation rates,” said Gail DePuy, Associate Dean of Academic and Student Affairs.

Mentor pairs are expected to connect at least once a month or more frequently if they wish, with discussion ranging from academics to school life, staying balanced and career concerns. As a newly evolving program, Mentor Collective is still establishing best practices for mentor/mentee pairs. Being able to meet in person is being considered in the future as more students are vaccinated for COVID-19.

“During this year of virtual schooling and activities, it has been harder for students to make friends and build a support network like they naturally would being on campus, said DePuy. “Implementing a mentor program where freshmen are automatically connected to a Speed School peer mentor helps them navigate their first year in engineering” she said.

In Mentor Collective’s first year, 254 freshmen mentees were matched with 91 upperclassmen mentors, and 52 alumni mentors have been working with 94 upperclassmen mentees. We asked two participating peer mentor-mentee pairs about their experience with the program. 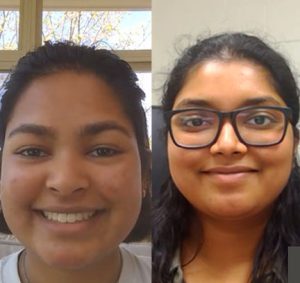 Senior Bioengineering Mentor Sai Sree Vangoor saw the emails about the mentoring opportunity and remembered her early years at Speed School, when a mentor who knew the ropes would have been welcome. “It would have been great to have a mentor who had been through classes and the processes of Speed School and could give me advice,” she said. “I thought I could take what I’ve learned the last few years and help others the way I once needed it. “

Sai Sree, who graduates in May 2021 and hopes to eventually get into medical devices design and production, said she and her mentee, Aafreen Shaik, discuss academics, personal life, career direction and more. “What is really valuable is when students can hear from others who have had the unique Speed School experience,” she said,” someone who has been in the midst of it and can say, ‘This is exactly what got me through.”

The circumstances created by the pandemic also compelled her to mentor. “For incoming freshmen, they haven’t had the experience of having other students and REACH tutors all in the same building, and easily accessible for support,” she said. “You don’t have the chance to have someone next to you to turn to and say, “Hey how did you do this, what got you through it?’ With everything online, it is hard to find someone you can just ask those questions to.”

Sai Sree’s mentee, freshman Industrial Engineering major Aafreen Shaik, said Sai not only gave her important tips on how to study but also helped her network. “I got involved with Student Council, and now I’m on the board. It’s been great to have someone older help me find my place within Speed School,” she said.

Aafreen said she believes having someone familiar with Speed School to help instill confidence in first-year students is a critical element of Mentor Collective. “Freshmen don’t know that in Speed School it is normal to struggle, or not understand something right away,” she said. “They come in being a straight-A student in high school and expect to be at the top of the class. They might get a C and immediately think, ‘I’m so stupid.’ The mentorship program helps underclassmen realize that it’s okay to struggle and fail, and you can talk about it with your mentor.”

For Sai Sree and Aafreen, the pair now follow each other on social media, and are friends as well as mentor/mentee. Their common connections have made them close, including being female, of Indian heritage and Louisville natives. “Having a female role model and someone of the same background helped us click more in the relationship, said Aafreen. “I can see Sai is doing well despite what she might get from men or white people in engineering, and that helps me a lot,” she said.

Sai said she appreciates how Speed School encourages participation in the Women in Engineering program and the Biomedical Engineering Society. “There are times when I have felt that people do try to knock down female voices, but there is always someone that tries to stand up for you, and says, ‘Hey, she had a question or she had a comment that’s important to listen to.“

For Aafreen, the best thing about the mentoring program has been knowing Sai has been in her shoes and understands how she feels. “Having Sai’s reassurance when I am struggling with something really helps me put everything into perspective, like why I’m in Speed School.”

Only a sophomore, Bioengineering major Luis Rodriguez knew immediately he wanted to be a mentor as soon as he saw the opportunity.

“I was lucky to have friends and help from professors and other students my freshman year,” he said. “When COVID hit, I knew I wanted to help students succeed just like people had been there for me. With online classes, new students are not meeting people; in many cases not even seeing faces, just watching the professor,” said Luis. “There aren’t conversations happening student to student.”

In a happy coincidence, his assigned mentee, freshman Chemical Engineering student Klemmer Nicodemus, ended up being a student he had already befriended in the library earlier in the semester.

Klemmer said when he signed up for the program, he was just looking for another person to talk to. “I knew networking was a good thing to work on. I figured it couldn’t hurt to have someone in your corner, and I got Luis. He has helped me a ton,” he said.

Luis said he knows what stress Klemmer is going through with exams and coursework, and he wanted to help him with time management, studying tips and finding resources. “The stuff I’m telling Klemmer is what I wish I had known,” he said. “It’s great to be able to pass that on, and we can also try out new things for him. It’s a learning curve for both of us.”

“I walked in to the mentoring program looking for someone to give me a guiding hand so I can be more successful and it’s been 100 percent like that for me,” said Klemmer. “Luis has helped me with the best study habits, and learning about the quirks of the summer term, which is tougher but more fun.”

Achieving balance between work, study and play is sometimes a difficult dance in a program as intense as Speed School, but Luis said that’s an important part of his mentoring as well so he emphasizes time management to Klemmer. “It’s important to surround yourself with friends with the same mindset and goals so you can take time together.”

One of the most valuable things Luis has imparted as a mentor, said Klemmer, is adaptability. “That’s a big part of engineering. You have got to be able to roll with team projects, or something as ground-shaking as a COVID crisis,” he said.

Helping in a crisis is key to Klemmer’s future engineering plans, as he wants to work cleaning up disasters as well as working with companies who want to sustainably produce goods or sustainably provide services.  Originally from Western KY, Klemmer is a self-confessed ‘tree hugger’ who was inspired in his aspirations by his namesake, an engineer and his father’s best friend.

“Throughout my childhood, he sent us postcards from Brazil, Spain, Washington, telling us this disaster happened this week, and here’s what I’m doing about it. Once I found my passion for the environment, I knew I wanted to do that – do some good that will make a real impact down the line.”

Luis, a first generation college student, said he owes his parents his gratitude for the hard work they gave in order to give him the opportunity to get him to where he is today.  He plans to go to medical school after he receives his bioengineering degree. As early as second grade, he knew that he wanted to be a cardiothoracic surgeon, a big career goal for any seven-year old to be sure. He wants to use his bioengineering expertise to develop more efficient surgical techniques or patents for new devices or products.

As for Mentor Collective, Luis has been energized by the program. “With every individual I get to know, I can help them with struggles we all go through in college. I can’t wait to be part of it every single year.”