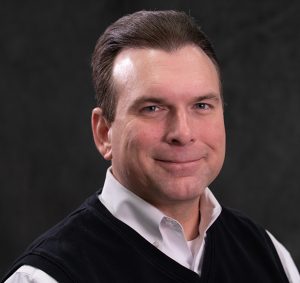 Michael W. Golway received his Bachelor of Science in Engineering Science in 1992 and his Master of Engineering with specialization in Industrial Engineering in 1993, both from the University of Louisville. He earned his Kentucky professional engineering license in 2000.

Golway is an entrepreneur, engineer and inventor. In November 2000, he acquired his first technology company, IDS Engineering. The company had two employees with a focused business model of workflow consulting services. Golway currently serves as president and chief executive officer of Advanced Solutions, Inc., a privately held company he acquired in November 2004 and parent company to an aggregate of technology businesses, including IDS Engineering. He has more than two decades of experience leading multi-disciplined engineering, consulting and technology firms.

Golway holds numerous patents. He is the lead inventor for the integrated solution of BioAssemblyBot® and TSIM™, the world’s first 6-axis robotic 3D bioprinting system that is learning how to 3D print human organs. Advanced Solutions offers innovative 3D bio-printing technology for the biomedical and pharmaceutical industries among other products.

Michael married his high school sweetheart, Renee, in 1992. They have three children and reside in the Louisville area.

Related
View all the Speed School award recipients for 2020