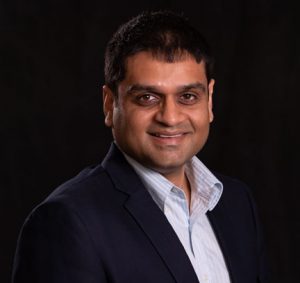 For more than a decade, Giridharan, one of the first faculty hired for Bioengineering in 2007, has been working on the development of a pump that aids patients with a congenital heart defect. He began his collaboration with pediatric cardiothoracic surgeon, Dr. Mark Rodefeld of Indiana University, a pioneer in the field, in 2008, which has resulted in this award. This grant draws on the expertise not only of engineers from University of Louisville but also experts from five other institutions: Indiana University, Clemson, Stanford, Texas A&M and OHSU (Oregon Health and Science University).

The blood pump in development is designed for patients born with a congenital condition where they are born with a single heart ventricle instead of two. Giridharan said this is the fifth most common structural heart defect. Patients with the defect have to undergo three open heart procedures before the age of three to convert them to what is called a Fontan circulation. The patient’s single ventricle drives the flow throughout the body and through the lungs, with just one ventricle now doing the work of both ventricles. The problem with Fontan circulation is that the single ventricle has to take the additional load, which eventually leads to failure for a lot of patients, explained Giridharan.

“When you think of heart failure, you think of a heart unable to squeeze blood out, but here the ventricle is unable to fill adequately with blood because there is no right ventricle,” he said. “The mechanism of failure is very different; it’s more of a filling problem, so it requires a new pump design, one that can handle two inlets and two outlets simultaneously.”

It is estimated there are about 30,000 people in the US with Fontan circulation alive today, according to Giridharan. They survive an average of 30 years before the ventricle starts failing. “For many patients, it’s a matter of when their heart will fail, not if, and there is no cure,” he said. What the unique pump will do is act as a booster pump to help fill the ventricle. “Over seventy percent of patients with failing Fontan have a ‘filling’ problem, and this pump will serve them,” said Giridharan. “For the other 25-30 percent of patients whose heart cannot eject, there are support options already in the market,” said Giridharan.

The bioengineer emphasized that the whole project would not be possible without all the collaborators and expertise from UofL and other universities. “They all have an integral part. It’s a team effort,” he said.

The $2.1 million UofL subcontract portion of the grant will be used to support the development and testing activities of the Fontan pump by Dr. Giridharan and his UofL collaborators – Dr. Steven Koenig and Dr. Ayman El-Baz from Speed School, and Dr. Karen Powell from UofL Comparative Medical Research Unit.

The goal of the project is to generate adequate data in four years to submit to the Food and Drug Administration (FDA) for approval. “Before the device can be clinically implanted, we need to demonstrate safety and efficacy,” said Giridharan. “Once we have safety and efficacy data, we are targeting the humanitarian device exemption, which is a type of FDA approval needed to implant in patients,” he said. “It’s a unique pump designed for a unique application for a population that is highly underserved.”