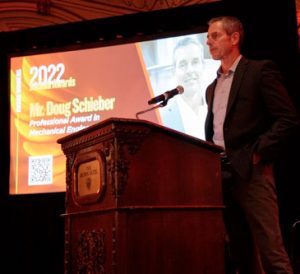 Doug Schieber has been awarded the 2022 Professional Alumni Award for Mechanical Engineering. An Ohio native, Doug graduated from Speed School in 1993 with a Masters in Mechanical Engineering, and is the CEO of Louisville-based Carrier Process Equipment Group. Schieber worked his way up in the company while earning an MBA. Today, Carrier is a 100% employee-owned enterprise with six businesses manufacturing custom engineered processing machinery in five States, Belgium and China.

Doug said the exposure that Speed School’s co-op program gave him to real world engineering problems and the wide range of job roles filled by engineers in corporate America was invaluable to setting him on the path to success. “Speed School taught me to be curious about everything,” Schieber said.

Some of his favorite memories of Speed School were “solving the world’s problems and the fierce ping pong matches in the basement of the ME building, while mixing in studying now and then.” A passionate advocate for the manufacturing industry, Schieber has held leadership positions in various industry associations. He lives in Oldham County with wife Tina and remains active in the Louisville community, helping to raise four children, including a class of 2021 Speed School graduate. “Speed School offers a great place for young people to figure out how each of them can best make a difference in their family and community,” he said.

Schieber was presented the award during Speed School’s annual awards dinner at the Brown Hotel on Oct. 21, 2022.