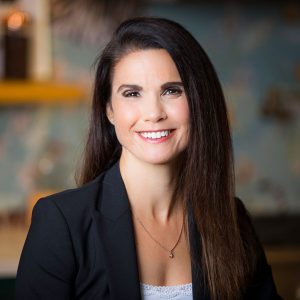 For more than 25 years, Speed School alumna Marcia Brey has forged an impressive career path at GE Appliances. In her latest promotion to vice president of distribution for the company, her position is responsible for all facets of the distribution network, including transportation, logistics warehousing and delivery of appliances to millions of customers and consumers. Brey has been recognized as a “Forty Under Forty” recipient by Business First and a “STEP Award Honoree” from Women in Manufacturing (WiM).

After a succession of high profile growth assignments in technology, manufacturing, lean enterprise, quality and commercial services, Brey’s latest position in distribution is one she is particularly passionate about. “I’ve worked in almost every function at GE Appliances, and I love distribution,” said Brey. “It’s like problem solving on steroids. This job has a large scope of responsibilities ranging from broad and strategic to figuring how to get an individual in Baltimore their refrigerator today,” she said.

Starting with her Speed School co-ops, these experiences laid the foundation for the mechanical engineer, who did her first two rotations with GE Aircraft engineering and then moved back home to GE Appliances for her final co-op, where she still is today.

A Louisville native who graduated with her master’s in mechanical engineering in 1994, Brey credits her engineering education for her steady career climb and series of professional accomplishments within the company over the last 27 years.

“Speed School teaches you how to learn and think,” said Brey. “You learn how to absorb information quickly, ascertain what you need to solve the problem at hand, and move at a fast pace with logical thinking. It’s something I’ve used in every role that I have had in my professional career and it’s served me very well,” she said.

Dedicated instructors at Speed School were also key to her development, said Brey. “I had phenomenal professors who didn’t just teach the material, but developed a relationship with you and challenged your thinking. It went beyond providing just enough information to pass the test. It was about teaching you the mindset of an engineer.”

Speed School also bestowed Brey with valuable self-confidence that she carried into her future.
“Whether it was in labs or class or teamwork, there were so many hands-on experiences that challenged my skill sets,” she said. “I started as a shy and intimidated female wanna-be engineer, but because of Speed School, I was able to effectively compete and win a sought-after entry level program role as an Edison Engineer with a great company. Where I started as a timid freshman and where I ended up had a lot to do with Speed School. It made all the difference for me.”

Paving the Way for Women Engineers

For Brey, being a woman in a non-traditional career path like mechanical engineering in the 1990s wasn’t always easy or comfortable. “Back then there weren’t many women. When I went to Speed School, I felt like I went from an all-girls high school (Assumption) to what felt like an all-boy college. It was a cultural difference and I spent a lot of time figuring out how to be one of the guys.”

A trailblazer, Brey said she has had the distinction of being the first or second woman in many of the roles along her career path, such as the first female plant manager at the refrigeration factory, and the first female warehouse manager for GE Appliances across the U.S.

Today, diversity is improving, said Brey, thanks in part to her alma mater. “We recruit co-ops and full time-hires from Speed School, and as one of the largest local employers of engineers, we appreciate the emphasis on diversity,” she said. “We need people behind the scenes designing and building the products that reflect the diversity of our consumer base.”

As the executive co-sponsor of GE Appliances Women’s Network, Brey is strongly committed to paying it forward to support the career development and promotion of other women. “I love mentoring and talking to young women. We reach back into high schools and all the way into grade schools to start talking to young women about careers in engineering. I had phenomenal mentors and coaches starting in Speed School and continuing throughout my GEA career, and I want to pass it on.”

Through the Women’s Network, she is also deeply involved in outreach to support women in STEM careers, and continuing to look for opportunities to pull women in. Women from Speed School and the Society of Women Engineers are invited to participate with GEA women in leadership forums and networking events.

Though it is slowly evolving, Brey said there are still unfortunate stereotypes about women in engineering. “In mechanical shops, working on cars or picking up tools, girls still get messages that those are ‘guy’ things to do,” she said. “The thought of going into a factory can be intimidating and seem so foreign. There is this assumption that factories are dirty and dark with old-fashioned machines. But that’s not true. With advanced technology, the world has evolved so much,” she said.

She encourages female students to consider the potential of engineering careers.
“If you like a fast-paced, team-oriented environment and you want to build and create things where people are really going to use your designs, technology and manufacturing can be great careers. You can be part of designing something, like appliances, that millions of people use every day in their homes. It can be thrilling.”

This is my Home

Outside the office, Brey and her husband, an electrical engineer whom she met at Speed School, are raising three boys and continuing the tradition of Speed School with one son a freshman in industrial engineering there, and another a high school senior planning to study computer engineering at Speed. Her family’s passion for volleyball led to converting their back yard into a sand volleyball court, and she is also a diehard University of Louisville basketball fan.

Committed to making a difference in her native city of Louisville, Brey is a volunteer with Catholic Charities and active with her church, St. Gabriel. She is also currently the Chair of the Board of American Red Cross, Kentucky Chapter, a nonprofit she has been involved with for the last 11 years.

“This city is my home, and I feel like it is my responsibility to make my community better,” said Brey. The Red Cross’s sole mission is to provide for those impacted by disaster, whether it’s a tornado, flood or single home fire, which unfortunately happens almost daily. I am honored to serve as board chair to continue that mission in our community.”