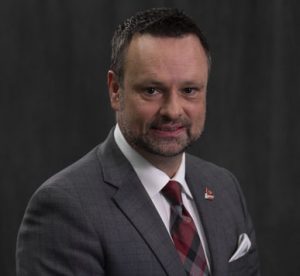 Larry Combs hails from Campton, Kentucky, population approximately 500. His first visit to Louisville at 17 years old was when he arrived at Speed School of Engineering, coming to the “big city” where he knew no one. But the engineer said Speed School and Louisville became a home to him.

“When I first came to Louisville, I didn’t know a lot about the city except it had a good reputation and I knew I wanted to be engineer,” said Combs.

The first generation college student said the size of the school and classes, and how accessible everyone was, were real positives about Speed School. “It’s a lot of work and it’s not easy, but you get great hands on learning in the labs,” he said. He credits the unique co-op program for his introduction to the world of work and access to local companies.

Now Senior Vice President, General Manager of Jack Daniels’ Supply Chain at Brown-Forman, Combs was honored with the Leadership through Inclusion Alumni Award for his fifteen years of service on the Industrial Board of Advisors, and his commitment to underserved students at Speed School.

With the support of Brown Forman, Combs has been working with Speed School on various diversity initiatives and with first generation college students for years. “I believe having good engineers and more engineers is critical to Louisville and Kentucky, and in my professional life I am always looking for engineers. Most of our entry level engineering hires are former co-ops,” he said.

For Combs, this work is personally gratifying as well. “It’s pretty satisfying to be behind the scenes and figure out how I can contribute and be able to connect with students who had similar backgrounds and challenges. Sometimes I look back and say, ‘I wish I had had someone to tell me it’s going to be ok and you’re going to make it,” he said.

Combs said kids who are first generation college students often don’t have the family or social support, and are the ones most likely not to make it. “For them particularly, a Speed School degree is a ticket to a much better life,” he said. “We asked ourselves what more could we do to get more kids interested in Speed School, especially women and Persons of Color?”

Addressing diversity and student needs has been the impetus behind Brown Forman Engineering Academy, a Speed School diversity program that seeks to recruit interested engineering students who are underrepresented, often economically disadvantaged or first generation students. “They get to spend a couple weeks on campus meeting professors, counselors, upperclassmen,” said Combs. “They get help with calculus, which can be a challenge that ends up being a road out for a lot of kids. They room together and then come into Speed School with a network already built. The results of that have been very good,” he said.

Brown Forman has also supported the Inspire Program, targeted at high school kids, as well as funded scholarships for more than a decade for students who need that bridge funding to stay in school.

“Getting kids there is only part of the equation,” said Combs. “It’s keeping them there and helping them be successful. We have started that pipeline, but it’s a long term play and you have to have patience,” he said.

Combs said the programs are starting to pay off. “We are seeing people who have graduated through all these programs, gotten a degree and a job,” he said. “They become great advocates to encourage others like them and we can help even more people.

For Combs, the Leadership through Inclusion Award means an acknowledgement of commitment and results.  “This is something I’ve worked pretty hard on and has been a journey for me. It’s recognizing that, ‘Look it takes hard work but you can do good things if you work at it and keep working at it,” he said.

Combs said he wanted to recognize the important teamwork of UofL and Speed School to advance these projects. “I can’t say enough about them,” he said. “Once we started on this, they have been tremendous; extremely responsive and innovative. In 2019, Engineering Academy was recognized by Diversity Magazine as one of the best programs in the country,” said Combs.

“UofL has meant a ton to me, “he said. It’s like a family member patting you on the back and saying thanks.”

Related
View all the Speed School award recipients for 2020