LARRI First of Its Kind in Kentucky 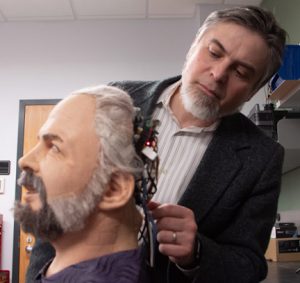 Louisville Automation & Robotics Research Institute (LARRI) is an exciting new addition to the centers and institutes affiliated with Speed School of Engineering at the University of Louisville.  The first of its kind in the state of Kentucky, LARRI provides the platform for the multi-disciplinary study of the challenges of human and robot collaboration. The LARRI team is comprised of 12 faculty, 15 affiliated faculty, seven post-docs, five research staff, and more than 45 graduate and undergraduate students, all with a passion for robotics.

Learn more about LARRI in this video.

The multi-disciplinary approach allows the team to tackle large research projects and provide solutions for current and future manufacturing, healthcare and logistics challenges.

The former Humana gym, located at 601 Presidents Blvd, just a few blocks east of Belknap Campus, will be the new site for LARRI after the building has been repurposed and renovated to accommodate the expanded labs and facilities needed. Due to COVID-19, construction has been somewhat delayed but it is still anticipated to be available for use around the beginning of the year in 2021.

LARRI’s primary areas of research include human-robot interaction, automation and robotics for industrial applications, networked robots and autonomous vehicles, and planning and control for mechatronic systems.

Dr. Dan Popa, Professor of Electrical and Computer Engineering, is the Director of LARRI.  Since 2016, he has been the Vogt Endowed Chair in Advanced Manufacturing, and is the Head of the Next Generation Research Group (NGS) conducting research in two main areas: 1) the design, characterization, modeling, and control of microactuators and precision robots and 2) social and physical human–robot interaction through adaptive interfaces and robot skins.

Popa said he envisions LARRI’s impact to be the connection between Speed School graduates’ theoretical education to hands-on, practical applications of relevance to local industry.

“With LARRI, we want to establish a national and international presence for people to know that we are a thriving robotics institute and the first of its kind in Kentucky,” said Popa. “We want to reach out to colleagues at UK and other state universities to leverage and share this expertise. The Commonwealth works closely with industry, and having these facilities will help us with project work relevant for industries here,” he said.

In addition, having an institute like LARRI makes it possible to compete for Department of Defense and National Institutes of Health grants in collaboration with researchers from UofL medical school or other colleges, noted Popa. Typically, these larger grants require an Institute organized like LARRI.

With more than $13 million in active federal grants, more than 40 publications over the last year, and 45 students (20 undergrad and 25 graduate students) involved in research at LARRI, Popa said LARRI is already having a significant impact for students, research and industry in the area, and will continue to grow.

“We will increase our numbers of grad students in all departments, including computer engineering, computer science, bioengineering, as well as faculty in civil and industrial. We plan to have 50 graduate students (twice the current number) at our new building, which represents a significant portion of Speed School’s production of graduate students,” he said.

The skills students are learning in Robotics are highly specialized and marketable, said Popa. “Our undergraduates co-op at local industries that use robotics, and our grad students complete masters and are in high demand because of the shortage of people who know how to use robots,” he said. The LARRI director said he hopes to expand the educational track to include a degree or certificate in robotics in the future.

Reaching out to other disciplines is necessary in the field of robotics, said Popa, but it is also a way to forge partnerships with other schools like medical school, nursing school, arts and sciences such a psychology and physical therapy.

These cross-disciplinary aspects enrich the educational experience for students. “It exposes students to multiple perspectives and they can see what students in other disciplines are doing, which makes them more prepared for the marketplace. We also have students who become interested in commercialization, and we’ve had the opportunity to have startups emerge from the Institute or even incubation. We are open to those ideas as well.”

As an engineer, Popa’s interest in robotics was initially sparked as a natural extension of his interest in physics, mathematics and engineering. “When you get something to move around, then it essentially comes alive, and impresses your visual senses,” he said. “What interests me currently is having the opportunity to team up with other disciplines, to expand knowledge in robotics as a stand-alone science.”

One of his newest projects involves human-like robots with friendly faces interacting with children at the University of Louisville Autism Center (ULAC). “The goal of the project is to try to quantify a new autism scale using robots, and to work on new interventions to increase the social skills of these children,” said Popa.

As the new frontier in artificial intelligence, the idea of human-machine interaction often prompts what Popa believes is a common misconception in the general public: robots are there not to displace workers but rather to help make them more productive. He cites healthcare as an example. “We don’t want to replace healthcare workers with robots but help them because they are overworked, exposed to dangerous pathogens, and have too many patients to care for, or the patients are very sick,” he said.

In fact, AI is helping healthcare in some revolutionary ways, said Popa. “We are seeing how it is taking care of the elderly, assisting with mobility impairments like exoskeletons where people relearn how to walk or to assist someone who can’t get up or out on their own.”

Despite the science fiction thread prevalent in the last 100 years, Popa said he is not concerned about a scenario where robots revolt or take over the human race. “It is very unlikely as long as we build robots with the goal of assisting humans and the express ability for people to control them,” he said. “It is much more likely we will need people who know how to maintain and repair them. On the other hand, there are always nefarious uses in the future. But I think the benefits will outweigh these negatives.”

As for creating a “perfect” robot, Popa is always optimistic. “We won’t be able to come close to what nature has built, but we can keep working on it.”