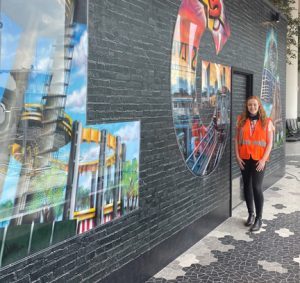 Growing up, Mairead Thomas was always a hands-on learner who excelled in math and science. When her mother enrolled her in a program called Camp Invention, it piqued her early interest in engineering.

Now a Speed School senior in mechanical engineering, Mairead’s summer was spent on the co-op of a lifetime. The New Jersey native was a project engineering intern with Walsh Construction, and had the opportunity to work on the LaGuardia Airport Redevelopment in New York City, currently the largest private-public partnership construction project in North America. Originally built in 1965 to accommodate eight million people, 15 million fly out of LaGuardia daily.

A native of New Jersey, Mairead arrived at her project on May 4 at the height of COVID-19. But with the proper precautions, Mairead said the last three months have been a tremendous learning experience and path to her future.

“Before working this internship, I would have said my dream job was to be in some position in a 3-D printing lab, but after working with the project engineers and MEP (Mechanical Electrical Plumbing) engineers this summer, my dream job would be doing what they do,” she said. “Being all over a job site and doing something a little different every single day was really cool and kept the work from getting monotonous.”

With her worksite at Concourse A at LaGuardia airport, Mairead had the opportunity to work with different subcontractors, such as insulators, electrical, plumbing and mechanical, following up on punch list items and learning the many different systems that keep the building running behind the scenes. “My job was to manage my subcontractors and make sure everything’s going according to the drawings and to the schedule,” she said. “

In addition, Mairead worked with MEP engineers to track and inspect different devices in the building, like occupancy sensors and emergency lights, and making sure they’re up to code.”

The student said she has most enjoyed the interaction with people, and the ability to see the project come to fruition.

“From the first day I started on this project, not knowing anybody and really nervous, I have made many professional connections from subcontractors to tradesmen all the way up to the general superintendent,” said Mairead. ”With many engineering jobs, you don’t really get to be out in the field seeing the progress on the project from day to day. The day I started, there were no finishing touches and you could still see wires – and fast forward to where everything is now; we are ready to open the concourse tomorrow,” she said.

While the Concourse A section of the LaGuardia airport redevelopment is now completed, the entire project is scheduled to be finished in 2022.

Mairead said her education at Speed School has been a first-rate preparation for the challenges of the workforce.  “One thing our professors are adamant about is learning how to work with a team,” she said, something that has proved valuable on her project. “That is so true because it doesn’t matter who you’re talking to or working with, it’s about working with them successfully and being an adult. You always need to be professional, respectful and get the job done.”

She has a message of encouragement for prospective or new Speed School students as well. “It is hard but 100 percent worth it. Don’t quit! I wanted to give up many times, but once you get your first co-op and realize that engineering isn’t all calculations and exams, you start to love engineering again.”

Registered for a hybrid of online and in person classes this semester, Mairead has one more co-op rotation next summer, and will graduate in December 2021. “I want to give a shout-out to the Co-op Office for helping me with my resume and application for this job, and for all they do to help place Speed Students in amazing internships/co-ops like this,” she said.

Mairead hopes to return to Walsh again for her last co-op. “I’d like to stay in project engineering in construction. I really fell in love with it this summer.”

Thomas earns the co-op of a lifetime

Mairead Thomas spent the summer working on the LaGuardia airport redevelopment, what was then the largest private-public partnership construction project in North America