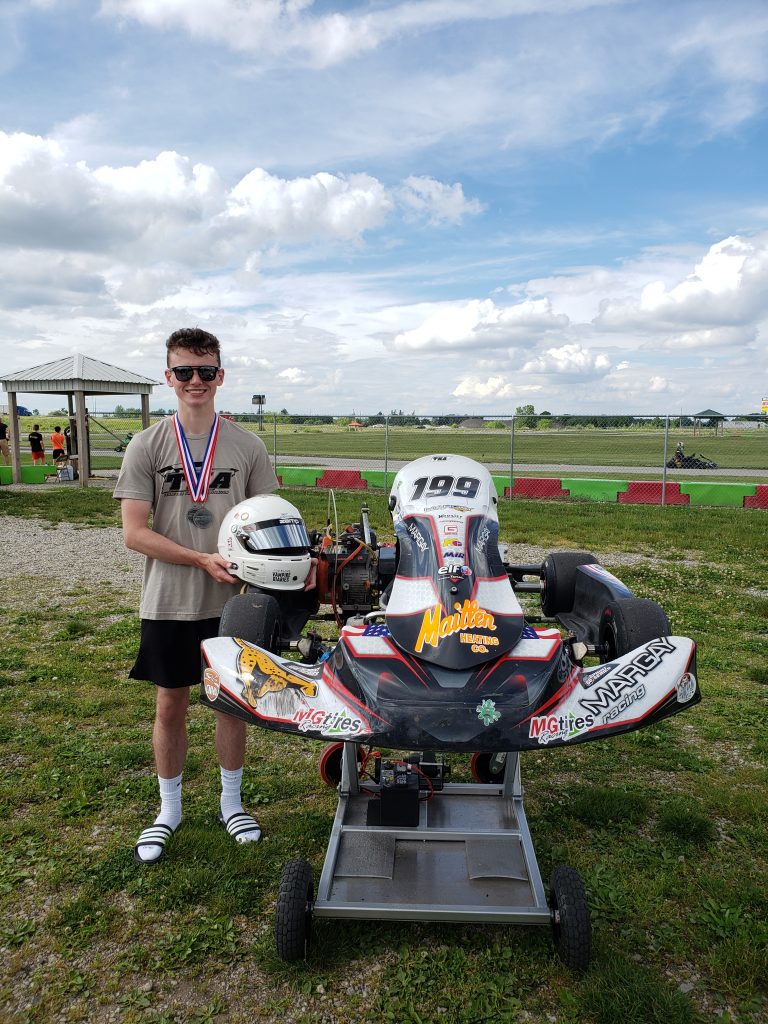 As a boy, Speed School freshman Ryan Gensheimer collected hundreds of Hot Wheels cars. That passion may have put him on the road to his recent accolade as 2021 Briggs & Stratton Weekly Racing Series US National Champion. The student received the most points for the year in his division of kart racing in the U.S.

The Briggs Weekly Racing Series collects results from April 1 through October 31 with each track/club allowed to submit 10 race dates. Gensheimer won the Senior/Master (USA) division. In total, 45 tracks were involved in the 2021 Briggs & Stratton Weekly Racing Series programs within the United States and Canada. In his division, Gensheimer triumphed over approximately 2000 other drivers to capture the win.  His prize was a MGM Espionage Kart Chassis.

Gensheimer first tried karting in 2017 at the small motor sports track next to the National Corvette Museum in Bowling Green, Kentucky, his hometown. “I’ve always been interested in motor sports like NASCAR, IndyCar, and when I tried it, I loved it. I immediately thought, ‘I need to do more of this, please,’” said Gensheimer.

He found out they had karting leagues, and he did really well in those, and for Bowling Green, that was the extent he could find there, so he and his Dad had to look for other places for the next step up and to buy their own kart. Tennessee Karting Association fit the bill for Gensheimer, since they raced regularly and had a league but in a bigger statewide event. “That was where we first started in what you’d call pro-amateur level three years ago, and we’ve been there ever since,” said Gensheimer.

Gensheimer said his favorite part of karting is the thrill you get when everything goes correctly. “It tests your mind,” he said. “You wouldn’t think so just going around a track in circles, but when you have 30+ of the best racers in the country in your race, everyone’s going for the same goal,” he said.

In his three years racing, Gensheimer said the Tennessee Karting Association has become a family to him. “It’s very heartwarming to see how everybody likes each other and I am grateful for the friends I have made on and off the track,” he said. “Karting brings people of all backgrounds together to produce some of the best racing there is. I am constantly challenged to be a better driver.”

Gensheimer said he sees a similar work ethic in both karting and his engineering studies. “That’s what transfers over the most is that you’re always chasing what’s better,” he said. “It’s a constant learning experience and wanting to do better, going out on the track and learning what did work and didn’t work.”

As for Gensheimer’s next stop, New Castel Motorsports Park, an hour outside of Indianapolis, is the next level. “If you talk to anybody in karting, they’ll say that’s the big place where you want to succeed,” he said. “We’ve raced there, and done above average and what I was expecting, so this year we are transferring all our effort there, because it’s pretty much a step up from the Tennessee track.”

From there, Gensheimer said it is hard to level up in the sport without connections or a sponsorship, but he plans to continue to exercise his passion for speed. “Karting brings people of all backgrounds together to produce some of the best racing there is. I am constantly challenged to be a better driver.”