Interim Chair of Chemical Engineering Taking Department to Next Level 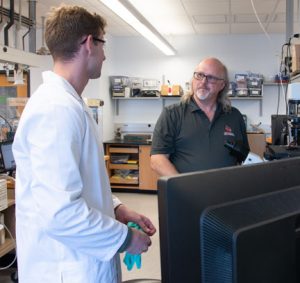 He was named an associate professor in 2010 and Assistant Chair and was recently promoted to full professor and interim Chair of the department. Named Professor of the Year in Chemical Engineering in 2012 and a JB Speed School Faculty Member of the Year in 2018, he has also won the Charles A. Plank Award six times.

Willing’s expertise lies in the development of complex fluid systems for practical applications and characterization of their stability. He is the first person to directly measure the interaction forces in complex fluids with a bimodal particle size distribution using the Atomic Force Microscope.

Willing said he is the rare engineer who picked chemical engineering right away for his career path. “In high school physics, they said here is a list of jobs that use physics and the first one on the list was chemical engineering and I thought that sounds interesting, and I was off.

After receiving his bachelor’s degree in Wisconsin where he did a co-op at SC Johnson Wax in their polymers division, Willing’s original intent was to get a master’s degree and return to industry. But a stint with a graduate assistantship at Auburn changed his mind. “I had to teach as part of the funding and I was TA for a number of classes in materials science and material and energy balances,” said Willing. “I discovered I really liked teaching and had a passion for it.”

Willing said he was drawn to teaching because he is an ‘extroverted introvert.’ You get engaged with students and see them connect with the material and have that a-ha moment. That’s exciting for me,” he said.

Right now teaching is a more complicated equation with distance learning, said Willing, but he views it as an engaging challenge. “Being able to try to figure out “How do I come at my teaching from multiple angles and make sure I’m covering a wide range of people and their learning styles – to me that’s interesting. Intrinsically it’s another science problem. I treat it as a research project. How do I connect with my students better? Let me try some things and see what works.”

Since grad school, his research interests have morphed more into surface science, how things interact with surfaces, said Willing.

For example, he is studying interaction forces related to a combination of particles where one is micron-sized scale and other particles are on a one-nanometer scale.

“How do we manipulate these systems in terms of stability and properties by playing with these combinations of particles? ” asked Willing. “That’s the nature of what our work with NASA is –can you actually destabilize in such a way that you can get the larger particles to crystallize and form really large crystal structures, while still incorporating those smaller particles as well? There are a lot of really good technical applications where you have a crystal structure of big particles and a crystal of small particles trapped inside of it,” he explained.  Some of Willing’s work, in progress on the International Space Station, examines the use of a complex fluid suspension in the creation of colloidal crystals that could lead to the development of lighter, flexible, less expensive quantum dot sensitized solar panels.

As the new leader of chemical engineering, Willing said the department is in a good place to take the next big step in development. “We’re at an interesting crossroads, a plateau of funding, so there is room to grow there, said Willing. “But how we have to grow is by identifying what are our departmental strengths. That will tell us where we need to go next and who the next few hires need to be,” he said.

With incoming classes in chemical engineering hovering around the 55-person range, Willing said he would like to increase those student numbers to 70-75. “There is growth opportunity there. We’ve done well attracting female students with 20-30 percent, which is good but I’d like to see more. We need to make it more targeted for chemical engineering, a more tailored message.

Willing said he believes the department could tap alumni more as well for helping the growth of chemical engineering. “I don’t think we’ve worked with them in a structured way saying, ‘Here’s where we need to go and here’s where we need your help to get us there,’” he said.

For his freshmen intro class, Willing has instituted Friday afternoon panel discussions with alumni from different industrial areas to give students ideas of what it’s like to work in different fields.

Interestingly, chemical engineers in the field have indicated they have continued working throughout the COVID-19 pandemic. “It’s an aspect people might not consider about chemical engineering,” said Willing. “Many companies never actually shut down and the workers were considered essential. We are critical to doing whatever a company is doing.”

Originally from Milwaukee, Willing’s family is mostly in that area but he has lived in Louisville going on 17 years. In his leisure time, Willing is a cook and self-professed ‘foodie’ and enjoys music and role-playing games. He and his wife have a son attending University of Louisville.