Students and faculty from Speed School of Engineering joined other community “makers” and dozens of visitors to showcase their work at the Louisville Maker Faire on Saturday, September 10 at University of Louisville’s Student Activities Center. Sidelined for two years by the pandemic, visitors flocked to the Faire booths inside and outside the SAC as well as The Red Barn.

Launched in 2006 in the San Francisco Bay Area, Maker Faires have been held in more than 200 cities throughout the world, according to Make. Equal parts street festival, science fair and business networking event, Louisville Maker Faire was billed as “The Greatest Show (and Tell) on Earth.” Makers ranged from tech enthusiasts to crafters to homesteaders to scientists to garage tinkerers, all sharing the Louisville Maker Faire purpose – to entertain, inform, connect and grow the maker community. “UofL and Louisville Maker Faire share a common goal: applying creativity and innovation to address needs today and into the future,” said UofL Interim President Lori Stewart Gonzalez. 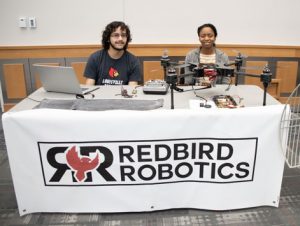 Sponsors of the event included GE Appliances, a Haier company and FirstBuild, a co-creation community with Speed School of Engineering that is changing the way products come to market, backed by GE Appliances and housed on UofL’s Belknap Campus.

For GE Appliances, the return of the Louisville Maker Faire was an opportunity to celebrate the inventiveness and creativity of the community, said Larry Portaro, Senior Director of New Product Introduction and Board Chair of the nonprofit Louisville Makes. “We want to create a culture of people who want to build what’s next, who want to create what people would like to own.”

As a Speed School alum, (MEE, ’92) Portaro said the community is fortunate to have a Level 1 Research facility university in the hub of the city which is helping to achieve that goal. “It’s the hands-on aspect of Speed School that is exciting, like the Engineering Garage,” he said. “Here today at the Maker Faire, you see the Baja team and Rocketry club and see the hands-on experience teams are getting, as well as the creativity inside and outside the classroom.”

GE’s extensive decades-long partnership with Speed School includes opportunities for internships, the Edison Engineers program, and of course FirstBuild, which employs Speed School students, and was well represented at the Maker Faire.  Ryan Persaud, a Speed School alum (MME ’20) and currently Product Developer at FirstBuild, said FB’s open makerspace community is a natural tie to Speed School students. “We want students to come in and learn as much as they can about actually applying knowledge they’ve been learning in school –use our tools to learn how to make things, use wrenches, use drills,” he said. “Speed School and FirstBuild- that is a marriage that has just got to happen.” 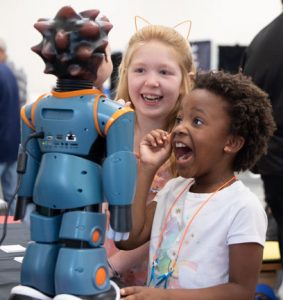 Since the opening of LARRI’s dedicated robotics lab on the UofL campus in October, it has hosted more than 400 K-12 and college students, industry professionals and researchers to learn about existing and potential uses of robots, drones and other technology. At the Maker Faire, LARRI’s booth enticed many younger visitors with Milo, the child-like robot developed to assist children with autism to learn how to recognize and repeat facial expressions.

“The beautiful thing about LARRI is that not only are we developing products that can be used in a variety of fields like biomedical, nursing assistance, drone technology, but we offer students the opportunity to gain knowledge and skills they’ll need in the field, and for when they start developing their own technologies in their career,” said Senior Jacob Jones, an undergraduate research assistant at LARRI.

Jones’ research focus is on deploying machine learning algorithms on microcontrollers. He plans to continue with LARRI through graduate school at Speed. “As a center for innovation and new technology, it’s great to see people flocking to us to see what new technologies we develop and what we continue to innovate.” 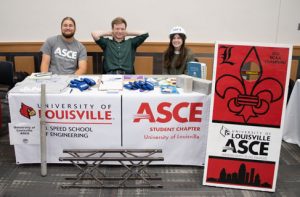 American Society of Civil Engineering (ASCE) Student Chapter President Senior Jake Schneider was on hand at Maker Faire to spread the word to people about “what we do in our time with all the work we’ve learned. It often goes under the radar,” he said.  For Schneider, Speed School and opportunities such as ASCE competitions have played a valuable role in helping him grow from student to ready for workforce. “Creativity is a big part of that,” he said. “There is no way to teach innovation but it’s the accumulation of everything you’ve learned that helps you get past your basic education to go out in the real world and make something happen.”

Junior Carson Foy was busy at the Red Bird Robotics booth showing off the drones created for the International Aero Robotics Competition. Foy said having the robotics club available and the tools that come with it in the Engineering Garage helped him nurture his passion for robotics. “For the Maker Faire, Speed School is a great pipeline to get people interested in engineering and making, and in coming to Speed School,” he said.

The cutting edge research being conducted on healthcare tech in aerospace was another popular stop for visitors. Manning the “Making Healthcare Tech for Exploration Spaceflight” booth was Sienna Shacklette, a second-year graduate student in Bioengineering, who has been involved with this Astro-surgery project for five years. With a national resurgent interest in space travel, NASA has for some time been considering what happens if someone needs surgery while in space. “If you are on the International Space Station (ISS) and get appendicitis, they can send you back to Earth in a couple hours,” said Shacklette. “But what happens when you are halfway to Mars? It would take multiple months to return.”

The project is addressing numerous aspects of this problem, including the development of surgical instruments that can be 3D printed as needed on the ISS, and what to do with the sticky problem of open wounds Vis-a-vis gravity. “We’ve developed a surgical fluid management system that would put a dome over a bleeding wound and fill it with water to fake gravity through pressure – stopping the bleeding,” said Shacklette.

This system also provides for surgical access, explained Dr. Tommy Roussel, Assistant Professor, Bioengineering, and Co-director of the Astro-surgery project. “The surgical immersion domes have ports to stick surgical instruments through walls to suture or staple.”

A Faire for Students of All Ages

Roussel said that what is great about Maker Faire is that the booths are designed for students, younger and older. “Kids can get close to it, play with it, learning that the math they’re thinking about is accessible. Even for my Astro-surgery project, more than 25 students have been heavily involved in the design, build and testing.

Maker Faire is a perfect vehicle to introduce and expose kids to all the projects, and might even inspire thinking, said Roussel. “What kind of technology am I interested in?  Is it purely mechanical, is it engines, is it rockets, is it drones, is it electronic or biomedical?” said Roussel. For the budding engineers at Maker Faire, that door is wide open.

Community visitors Ryan Ankeny and his son Carson, enjoyed wandering through the Maker Faire. “We came before and had a good time, said Ankeny. “It’s a good thing for kids to do hands-on and learn engineering skills.” Carson, 9, had his own ideas. “I have a plan on how to become rich,” he said. “I want to invent something when I grow up.”