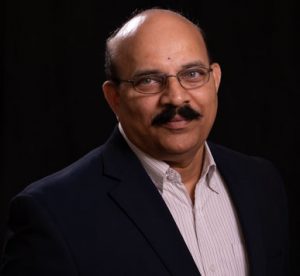 The winning results are in for the inaugural Soybean Innovation Challenge. The Kentucky Soybean Board partnered with the Conn Center for Renewable Energy at University of Louisville in seeking soy-based concepts and prototypes that are potentially commercializable. Dr. Jagannadh Satyavolu, Endowed Chair in Renewable Energy Research and theme leader for biomass conversion and biofuels at Conn Center, coordinated the project at UofL. Satyavolu said the Kentucky Soybean Board approached him based on previous research done by his team at the Conn Center with the United Soybean Board, the national organization.

“We made announcements to invite student teams to compete, and I invited speakers to come give webinars to students, and they each worked with faculty members to develop concepts of using soy hulls,” said Satyavolu. “Millions of bushels of soy hulls are produced in this country, a huge volume, and the only current market for it is to grind it up and use it as feed,” he said. Teams were screened in September 2021 and seed money was subsequently given to four teams to pursue their proposals.

Final projects were presented to the Kentucky Soybean Board at its December 17 meeting in Lexington. The winner of the Kentucky Soybean Board 2021 Soy Innovation Challenge and a $10,000 prize is the team of Athira Nair Surendran, Speed School Mechanical Engineering PhD candidate, and Dr. Sreesha Malayil, a post-doctoral associate with a PhD in environmental engineering and sustainable energy. Both are working with the Conn Center.  The team’s concept is to manufacture supercapacitors using activated carbon derived from soy hull fibers. The electrodes for the supercapacitor are 3D printed. The premise of this project is that soy hulls may be used to feed livestock at a low rate of return to the farmers, or they may be utilized to produce activated carbon and the carbon used for the 3-D printing of supercapacitors, which are basically batteries, and used for a wide variety of applications at a much higher rate of return.

Winning team member Athira Nair Surendran said she and partner Dr. Malayil were “elated” to claim the top prize in the Soy Innovation Challenge. “Winning this challenge means that there is some demand for our work in the industry,” she said. As part of her PhD thesis, Surendran will be continuing work on this project, and she and Malayil are currently working on a proposal for even more funding. “Considering that a lot of companies are turning toward greener energy sources, I believe our project has a high chance of being funded,” she said.

In regards to commercialization of this research, Satyavolu created a start-up company, Bioproducts, recently recognized in Business First as one of ‘22 Kentucky Startups to Watch in 2022.’” The company is built around UofL-patented technology that gives new life to local distillery organic-based byproducts, for example, as specialized activated carbon such as used in the winning Challenge project. BioProducts is working with UofL and looking to commercialize, said Satyavolu, once they have more data. “One application for carbon electrodes is the supercapacitors,” he said. “Active carbon is going to become a soy product.”

For the Soy Innovation Challenge, the project of second place winner Saleh Khanjar, who won $5,000, focused on building vehicle components using soy polymers in place of plastics made from petroleum, making a car more renewable and sustainable while reducing the weight of the vehicle by as much as 1,000 pounds. Two other concepts were awarded seed money from the September presentations. The SoyData project included the creation of a database of amino acid and other compound profiles in vegetable oils, and the possibility for developing an app to make it easy for manufacturers to understand pathways to soy-based resins. The final project was focused on genetically modifying soybeans for drought resistance. These two project development teams were awarded $1,000 each for their efforts.

Satyavolu said he is pleased with the results of this first year of the Challenge. “The Board really liked the enthusiasm and the samples the students brought in and they considered it a success, and they are the customer,” he said. For next year’s event, Satyavolu said, in consideration with input from the Soybean Board, he hopes to expand the Challenge to all universities in Kentucky.