Nearly 100 students, faculty, staff and alums take the oath of the Order of the Engineer at Speed School’s inaugural ring ceremony held April 25, 2022.

Senior civil engineering student Sophie Lipomanis was determined to bring The Order of the Engineer to University of Louisville Speed School. Originally a ceremony that began in Canada in 1926, America adopted a version of the Order of the Engineer in 1970. It was initiated to foster a spirit of pride and responsibility in the engineering profession, to bridge the gap between training and experience, and to present to the public a visible symbol identifying the engineer.

In the four decades since its introduction, the engineering ceremony has spread to 27 states and engineering schools across the nation. Graduate and registered engineers are invited to accept the “Obligation” of the Engineer and wear a symbolic steel ring to honor it.

The Obligation is a creed similar to the oath attributed to Hippocrates (460-377 B.C.) that is generally taken by medical graduates and which sets forth an ethical code. Initiates pledge voluntarily to uphold the standards and dignity of the engineering profession and to serve humanity by making the best use of Earth’s precious wealth. 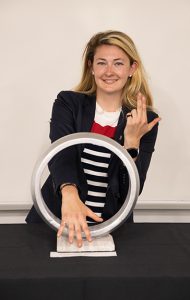 Sophie Lipomanis, senior majoring in civil engineering, was the driving force to bring the Order of the Engineer ceremony to UofL.

Lipomanis, who is half-Canadian, grew up knowing about the Order of Engineers from her grandfather, a civil engineer, and she had hoped he would see her take the pledge before he passed. While unfortunately that didn’t happen, Lipomanis worked with an event committee of administrators to coordinate the logistics involved to bring it to UofL’s campus. “He was proud that I cared so much about it,” she said.

After two years of working to get the Order of Engineer to UofL, history was made April 25, 2022, as University of Louisville’s inaugural Order of the Engineer ceremony was held. Ninety-five, including seniors graduate students, alumni and engineering faculty, acknowledged the oath and donned their stainless steel ring for the first time.

“I think the reason it means so much is because it’s not an accolade or award you earn,” said Lipomanis. “It’s a solemn oath to maintain the highest standard in the engineering profession no matter what engineering discipline or professional path you may take,” she said. “You’re saying to society, ‘I am willing to take on the responsibility of people’s lives based on projects I’m building, sites I’m designing, and inventions I’m making as an engineer, while always promising to do my best job.”

Pamela Thomas, assistant professor, Computer Science & Engineering, was one of four faculty members who participated in the Order of Engineers ceremony. “I thought it would be a great opportunity to re-affirm my commitment to what working in an engineering school means, and support the students who are making the choice to be qualified, competent engineers,” she said.

Mark McGinley, professor of Civil & Environmental Engineering, who took his oath as a Canadian years ago, acted as master of ceremonies for the event. He believes it is important for Speed School to have the Order of the Engineer to help instill a sense of obligation in young engineers. “It encourages engineers to identify with other engineers in common cause – we have a duty to the betterment of mankind and we rely on each other to fulfill that duty,” said McGinley. “This is not just a job; it’s a career where we are obligated in our practice to do our best for a higher order society.”

Mechanical Engineering alum Grigory Tarsevich, ’17, said he wanted to participate in the ceremony to demonstrate pride in his profession. “This just brings us together and shows us it’s about more than just a good salary,” he said. “It’s common inspiration for what we work towards as engineers.” Tarsevich, a native of Omsk, Russia, and two-time Olympic swimmer (2016, 2020) has now completed his athletic career and returned to the city of his alma mater to embark on his career as a thermal engineer for Vogt Power.

Computer Science and Engineering alum Max Pisaryk, ’19, who was also inducted, currently works at University of Louisville Information Technology and is working on his Masters of Engineering Management degree. “I feel like it’s a sense of belonging to a group of highly educated and motivated people, and I want to be a part of that group.”

For Sophie Lipomanis, the Order of the Engineer is more than just another feather in her cap, it’s about providing a legacy. “It makes me so happy to know that the year I graduated is when UofL initiated it, and hopefully it will continue for every year now,” she said. “It’s been so cool to be a part of the team behind it. I can tell my kids, ‘Hey, you know the Order of the Engineers? We started that at UofL.’”

Future Order of the Engineer ceremonies will be held each spring semester with an invitation extended to alumni to participate.