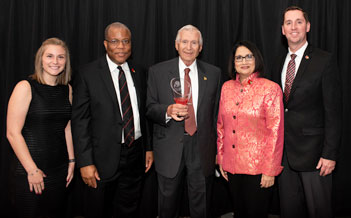 Each year, as part of the Homecoming celebration, the University of Louisville and the Louisville Alumni Office honor a group of distinguished graduates who are exemplary ambassadors for the university. Among most prestigious alumni was Gerald (Jerry) Hubbs who was recognized as Speed School Alumni Fellow during the festivities held at the Student Activities Center on October 24th.

Hubbs was born in Tell City, IN and moved to Louisville at the age of two. He earned a B.S. degree in Mechanical Engineering from the Speed School in 1964. Upon graduation, he was commissioned an ensign through Officer Candidate School (OCS) and served in the Navy Civil Engineering Corp; he was on active duty in San Diego and DaNang, Vietnam. He ended his Navy career at the rank of Commander 05. He then began his civilian career at Brown-Forman in Louisville, where he served in a number of roles including manager of bottling operations/packaging and eventually as vice president of engineering.

While at Brown-Forman, he earned an M.Eng. degree from the Speed School in Mechanical Engineering (1976) and was granted a patent. In the 1980’s, he generously started the Hubbs Family Endowed Scholarship Fund at the J.B. Speed School of Engineering. He retired from Brown Forman in 2002 but has continued his active participation in the community.

Hubbs has served as the president and founding member of the NSA DaNang Veterans Association. He has been actively involved in the Boy Scouts (troop 194), the Hand-in-Hand Ministries, and Habitat for Humanity. He also serves as a volunteer engineer for new, local businesses.

He was the recipient of the Professional Award in Mechanical Engineering in 2014.

Jerry and Mary Ann, his wife of fifty years, have five children (two of whom are SSE grads) and sixteen grandchildren.