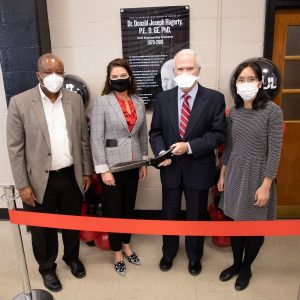 A beloved, iconic Civil Engineering Professor was honored with a classroom dedication and ribbon-cutting on September 27. A plaque dedicated to Dr. Donald Joseph Hagerty, PE, D. GE, PhD, has now found its home on the wall of Room 108 in the W.S. Speed Building. Currently a Professor Emeritus, Hagerty was a CEE Professor at Speed School from 1970-2010.

He taught geotechnical engineering for 40 years and has more than 55 years of experience in the field, serving as an expert witness in hundreds of blasting cases. He has also overseen and executed pivotal research on riverbank erosion, including two complete assessments of the entire length of the Ohio River.

A student favorite renowned for his friendly demeanor and sense of humor, Hagerty once insisted his students find the jokes that were hidden in the textbook he was using for class. “Students need to get real and relax sometimes,” said Hagerty. “They’ll come back more interested in what they’re reading.”

He established and in many cases, has maintained close relationships with his students, counseling them on academics, career choices, personal decisions. Hagerty said he remembers in his first year, to his surprise, one student even asked his advice about getting married. “He actually felt ok asking me about something that was really close to him in his personal life, and I felt greatly complimented by that.”

Still to this day, students remember him and approach him to talk and ask for advice or selfies when he is recognized around town.

Daughter Peggy Hagerty Duffy, now owner of Hagerty Engineering, followed in her father’s geotechnical engineering footsteps and got her Bachelor’s and Master’s in Civil Engineering (’90). She said for her it all started in a canoe. “I never intended to go into engineering, but I was inspired when we were doing an erosion research project,” she said. “I liked putting it together and figuring out how all these mechanisms worked together,” she said. “There was an engineering problem, and eventually there would be math involved, but at first it was just getting out in the field and figuring out what was going on.”

Years ago, Hagerty was his daughter’s grad school advisor at Speed School, but the tables turned when he retired from teaching and went to work for her company, Hagerty Engineering. “The first time I turned in a report to her, she pulled out this giant red pencil and said, ‘Now it’s my turn,” he joked. The two have worked together the last 12 years.

At the dedication ceremony, examples of Hagerty’s impact on the school were ubiquitous. Dr. Sun, Professor and Chairperson of the CEE department, spoke of Dr. Hagerty as her mentor. Madison Hamilton, a current freshman Speed School student from Eastern Kentucky thanked Hagerty for helping her to get into Speed School.

Daughter Peggy talked about the ripple effect of her father’s influence. “As engineers, he taught us how to make observations, how to care about doing a thorough job, but he also taught us how to think about your future, how to be a good spouse,” she said.

“If you think about the effect of just one person he touched, and then how that affected their life and how that affected who they know … there was 40 years of that,” she said. “His legacy is so much more than a classroom, but it’s nice to have something physical to remind everyone of what he did. The effects and influence of Joe Hagerty will go on for a long time.”

Dr. Hagerty said at the ribbon-cutting ceremony that it felt really nice to be honored with the classroom dedication. “The things I got out of teaching all those years was the contact with the students. I just loved what I was talking about, and I would look around the classroom and a student would get it, I could see it,” he said. To see that light go on – that was so thrilling.  That’s what I got out of teaching, and why being here with all of you means a lot to me.”