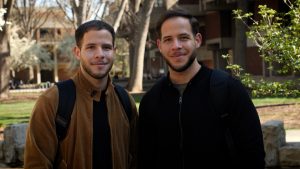 Twin brothers and Cuban natives Dariel and Damian Fuentes Brunelis are like many twins – they possess a close bond and mutual interests.  Among the things they share: living space, a passion for education, a career path, an interest in finance and entrepreneurship, and a desire to give back. Both serve as Speed School REACH tutors. As for their personal relationship, “He knows that he’s my best friend,” said Dariel of Damian. Both brothers will graduate from Speed School in May 2022 with BS degrees in chemical engineering.

The two emigrated to the United States from Cuba as sixteen-year olds, after a long journey fraught with obstacles, such as being deported three times before making it to the American border, where they were given political asylum. The brothers and their mother, Ilsa, also spent more than a year in transit in Trinidad and Tobago, awaiting their entry into America.

Despite the barriers, they were determined to come to this country for the educational possibilities not available to them in Cuba.

“Opportunities were very limited,” said Dariel. “The things that we could do and the careers that we could pursue, we did not really have a say in,” he said. “We came here to the U.S. where we could literally study whatever we wanted and pursue our dreams, and to be in a free country where we could practice whichever religion we wanted.”

Brother Damian added that he was excited to come to this country to achieve the freedom that the U.S. provides to the LGBT community. “In Cuba, my people are persecuted on a daily basis,” he said. “America is known as a place where you can achieve anything you want. Our mother, she wanted to provide that opportunity for us in terms of a good educational system.”

Assisted by the Kentucky Refugee Ministries to settle in Louisville, Damian said the hardest part of transitioning to the U.S. was the language barrier and adapting to a whole new culture and educational system. At their high school, the brothers were the only international students. “Coming from another country, you don’t know what AP classes are, what exams you need to take, the enrollment process for college,” he said.

But with help from the University of Louisville’s Admissions Office, Damian and Dariel made that transition from high school into the University of Louisville’s Dual Credit program in spring 2017. By the time they graduated high school, the twins both had more than 30 college credit hours already. The two attended Brown-Forman Engineering Academy the summer before they began Speed School. It was a valuable introduction to the possibilities ahead.

“It was a blessing to have the opportunity to know and learn about different engineering disciplines available, and to meet with faculty and other engineering students,” said Dariel. “I was a part of this group of people who were so excited about their co-op experiences and their classes, and I thought, ‘I want to be them when I get into college.’” Dariel knew he had found the dynamic and challenging environment he had sought.

“It was an amazing and incredible experience from day one,” he said.   “The school was very welcoming and supportive.”

Both brothers were also impressed and appreciative of the high level of diversity at UofL and Speed School. “There were international students from Venezuela and Colombia, and all over the world, so I felt comfortable right away,” said Dariel. “It really made me feel like I fit in.” 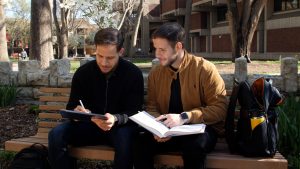 Damian and Dariel Fuentes Brunelis graduate from Speed School in May 2022 with BS degrees in chemical engineering.

How did both brothers end up choosing the same engineering discipline? “As a dual credit student, I started taking college algebra, calculus, chemistry courses,” said Damian. “I’d really fallen in love with mathematics and chemistry and I was like, ‘How can I find a way to merge these two things that I’m so passionate about together? And then chemical engineering came along.”

Dariel said, “I like the idea that we’re able to combine principles from chemistry and math and physics to create new products that are going to go out and really have an impact on people’s lives.”

Beyond his own driving ambition and hard work, Dariel credits Speed School with the foundation that launched his professional path.

“Professors like Dr. Amos were mentors,” said Dariel. “Her class really had an impact on the way I look at and solve a problem. It’s essential to have that kind of mentor guiding you.” In addition, Speed School gave Dariel networking opportunities on a level he didn’t expect. “It gave me the chance to be part of an institution that allowed me to connect with employees that are part of global companies, and I was incredibly surprised.”

Damian agreed that Speed School professors have also been integral to his success in the program.  “I think they do an amazing job at understanding that it’s a journey for all of us from the day that we start here at the university level until the day that we leave,” he said. “But it’s also a journey as well after we leave, so whenever we have a question about our career, they were there to tell us some of the choices we could make.”

The Brunelis twins were united in their praise of Speed School’s esteemed co-op program and cited its significance in shaping their respective paths forward from engineering student to future professional.

Damian’s three co-op rotations included working in the world’s largest additive manufacturing center in Houston, a medical polymer research and development company, and finally process engineering for medical device manufacturing.  “Co-op experiences help you define what you want to do in terms of your career,” he said. “For me, that last co-op showed me I wanted to work alongside others in a production facility,” he said.

This desire to “lead others and make sure operations are optimized” led Damian to accept a job offer with Amazon, where he will begin working in a couple months as an operations manager for a delivery site in Dallas.

Dariel said the co-op program has been the biggest highlight of his Speed School experience. “It’s an amazing program where you will go out and gain the experience and work with incredible companies, and that’s priceless.”

Dariel had long dreamed of working in the oil industry, and he said his first career goal was to be selected for a highly competitive internship with Exxon Mobil, so he dived into all that the engineering life on campus offered. He networked with professors and communicated his goals, made connections with groups like Engineers Without Borders and the Hispanic Society of Professional Engineers, and worked hard in his classes.

He got that first co-op rotation with his dream company, and now as a graduating senior, he looks forward to working for Exxon in a few months. “I get to work at one of the largest refineries in the country, and I’m really going to be challenged to my core, so I’m really excited,” he said. “The energy industry has a big impact in the global community, and I wanted to be part of that.”

Dariel said he would definitely recommend Speed School for any aspiring engineers. “It’s the great faculty in every department, the engineering co-op program which is very well known in the industry, and just the support you get overall through your whole career,” said Dariel. “It’s just amazing how you come into your first year and you shape into this well-rounded engineer by when you leave, and you already have a full year of experience.”

Damian said the Speed School faculty are very supportive and understanding, both inside and outside academia. “They all realize that life happens, and they want to see you succeed.”

For family support, the Brunelis brothers have also had their mother on their side throughout their journey, a vital connection. She encouraged them every step of the way.

“I can’t imagine how difficult it would be to leave a whole life, 50 years in one country and leaving to go to another country where you don’t even know the language, all to seek a better future for your kids,” said Damian.

“Without her guidance, and without her being the person putting everything together to get us here and give us access to the education, we wouldn’t be here,” added Dariel. “A lot of our success has been due to her,” added Dariel.

As for the near future, Damian and Dariel, who have accomplished so many things together, will both be in Texas, just a few hundred miles apart. “We are best friends and I think being together through this experience as undergraduates made our bond even stronger,” said Damian.