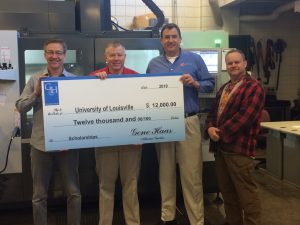 For a second time, the Vogt Engineering Staff at University of Louisville Speed School of Engineering’s AMIST (Additive Manufacturing Institute of Science and Technology) Core Facility has been recognized with the Gene Haas Foundation Award. The grant is $12,000.

The Gene Haas Foundation Award is named for Haas Automation, Inc.’s founder and the foundation’s primary goal is to provide grants to address a dearth of vocational education, train future workers and build skills in the machining industry. Their website sited a 2015 report, “The Skills Gap in U.S. Manufacturing 2015 and Beyond,” that stated, “Over the next decade, nearly three and a half million manufacturing jobs will likely need to be filled, and the skills gap is expected to result in two million of those jobs going unfilled.”

“For UofL, the primary use of this grant money will be to provide increased opportunities in training, education and promotion of modern CNC (Computer Numerical Control) manufacturing methods and related equipment,” said Gary Graf, Coordinator of Engineering Technical Services at AMIST. “CNC technologies are the gold standard for manufacturing in today’s global market, leveling the playing field to allow smaller companies to sometimes compete against a large competitor. CNC machining is the required end game to any companies that need to produce accurate, detailed parts in a repeatable manner,” he said.

The funds can also be used in the form of NIMS (National Institute for Metalworking Skills, which is becoming the standard for individuals and companies to standardize a learned set of skills recognized across entire manufacturing industry), as well as support team competitions such as Skills CNC competitions, FIRST Robotics, racing programs and Solar car challenges.

Formerly known as Rapid Prototyping Center (RPC), the AMIST (Additive Manufacturing Institute of Science and Technology) Core Facility, has one of the best equipped facilities with world class capabilities for 3D Printing/Additive Manufacturing (AM) of metals and polymers. Established as an industrial/academic consortium, the former RPC has been producing prototypes and low volume end-use parts and has been performing applied research, technology transfer and industry-funded projects since 1993. Benefits of the consortium include access to U of L’s J.B. Speed School students and graduates – engineers of the future with training in this state-of-the-art technology.

In the fall of 2007, AMIST expanded its capabilities when it became the only Louisville-area Haas Technical Education Center (HTEC) for Haas Automation, Inc. With advanced additive manufacturing equipment and several of the latest CNC machine tools, the AMIST Core Facility is now one of the most advanced prototyping facilities in the Louisville area.

For Haas Automation and UofL, the partnership has always been a win-win, said Gary Graf. “Our relationship extends back to our first purchase of equipment in 1999. They have been great partners to UofL and their extensive educational discount has allowed us to stay on the forefront of CNC manufacturing at affordable value. We host potential Haas equipment customers within our facilities across campus to show other technologies and give exposure to students. Yearly, we host a customer appreciation event and day-long demo and trade show that attracts more than 100 visitors to Speed School.”

“We are proud to have received assistance from the Gene Haas Foundation to help with our efforts in education, said Graf. “Haas is a great product and makes great effort to support educational programs throughout the country,” he said. “We have exposed many new students and business owners to their products and are happy to be considered a valued partner to their organization.”