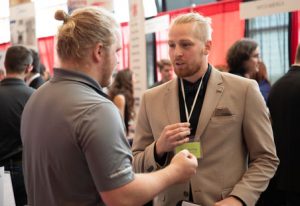 There were nerves aplenty but much excitement, too on the faces of the Speed School students attending the 2022 Career Fair on September 8 at the PNC Club at Cardinal Stadium. Dressed in their best interview-ready wear, approximately 350 students had the chance to meet with 82 local, regional and national employers to exchange information and talk about jobs. The fair resulted in more than 130 next-day interviews for co-op or jobs, and an additional 17 information sessions scheduled for the month of September.

“The students did a great job preparing for the event, dressing up and jumping into the recruitment season,” said Mary Andrade, Director, Engineering Career Services.  “We are the first recruitment event of the fall season, so we start prepping our students in the summer with co-op orientation, resume preparation and setting up practice interviews with employers,” she said. “By the time they come to co-op seminar in the fall, they are “recruitment ready.

To prep for the career fair, Senior Mechanical Engineering student Andrew Muench said he bought nicer clothes, refined his resume and prepared for basic questions such as what he is doing and what he is pursuing in the coming months. His career fair visit has resulted in five interviews lined up in the next few weeks.

“I talked to a lot of interesting companies at the career fair,” said Andrew, who completed his three co-op rotations at LG&E in project engineering.

A native of Northern Kentucky, Andrew said that location is one factor in deciding where to go once he has job offers, as he prefers to stay in the Louisville area. Other criteria are, of course salary, but other things matter to Andrew as well. “I am looking for a company with a good work-life balance,” he said. With a slate of upcoming interviews, does Andrew have any advice for students at career fairs? “I would say don’t come unprepared, companies will notice that. I researched 10-15 different companies for the background knowledge.”

Andrew said the career services center did help to prepare him for the job fair gauntlet. “They offer a lot of different services like resume review and practice interviews – and encouragement.” 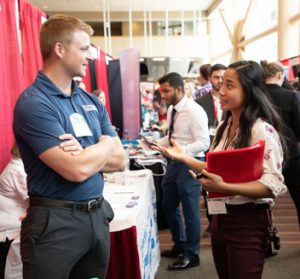 Despite never before attending a career fair, Louisville native Samantha (Sammy) Norman, Sophomore Computer Science & Engineering student, netted four interviews, as well as one formal and one informal co-op internship offer stemming from the career fair. Sammy said she wanted to keep an open mind about the process so she interviewed with a wide variety of companies, including a chemical company, aerospace company, and a home appliances company. “Being in computer science, you’re in a field that exists regardless of the industry.”

To stave off anxiety before her meet and greets with employers at the career fair, Sammy prepared by researching all the companies she was interested in and developing an “opener” for approaching each one. “Since I’ve never been in the field, I really wanted to hear about their experiences and what they’ve been able to do at their companies,” she said. “I found it inspiring.”

How does Sammy think she experienced such great success at her first career fair? “I feel like it was my branding, being personable. Going in, I knew I just wanted to be my cheery, lively, excited, enthusiastic self,” she said. “It’s also important to be confident, shake their hand, look them in the eye and have a full conversation,” said Sammy. “I would say it’s also awesome to be involved on campus. Even though I just joined the rocketry team, I could still talk about the first five weeks with the rocketry team,” she said. “I feel like it gave me a leg up.”

Engineering Career Services Director Mary Andrade said one of the hardest parts for students is when they have multiple offers and have to decide where to go – without knowing what could possibly be around the corner.

Sammy admitted she is a little stressed deciding between co-op offers in Savannah, Georgia and Cleveland, Ohio. “It’s like you’re making decisions in the dark,” said Sammy. However, Sammy said she knows how to advocate for herself. “With the job market being so crazy, you need to recognize yourself as a valuable candidate,” she said. It’s about prioritizing yourself and prioritizing your needs in the workspace.”