Working with student researchers, ME Professor Stuart Williams creates vibrant images from evaporated drops of diluted whiskey to identify counterfeits as well as provide insight into their chemical properties. 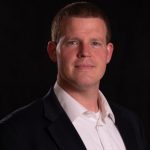 Colloid self-assembly is a technique where suspended particles (i.e. colloids) are arranged into a specific structure without external intervention. A familiar example of this is the “coffee ring” effect, where particulates accumulate at the perimeter of an evaporated drop of coffee or tea. Colloids are also present in whiskey, particularly when it is diluted with water and the water-insoluble constituents form sub-micrometer agglomerates. Williams and his team of students were interested to see how whiskey particles would behave and assemble during droplet evaporation. They found that whiskey droplets evaporated at high alcohol content left thin film deposits whereas a ring formed for significantly diluted samples. However, at intermediate dilutions (approximately 25% alcohol-by-volume) the remaining pattern resembled a network of microscopic webs, which they called a “whiskey web”. These webs were unique to American whiskey, those that were aged in a new charred oak barrel which includes bourbon whiskey; unaged whiskey and other non-American whiskeys did not form whiskey webs. Patterns were distinctly unique between samples though also repeatable. They hypothesize that volatile droplet evaporation manipulated the agglomerates to form these structures. Since the chemical composition of these agglomerates will differ between samples, so will their mechanical response to fluid dynamic stimuli thereby forming different structures. Therefore, whiskey web patterns could be used for counterfeit identification as well as provide insight into the chemical composition of American whiskeys.