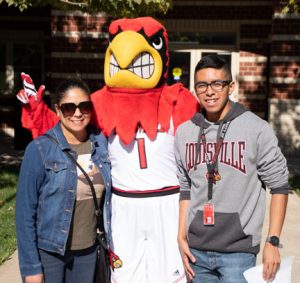 Freshman bioengineering student Aaron Lopez and his mom take a moment to meet Louie the Cardinal during move-in day.

With a new fall semester come the new freshmen, and Speed School’s ELLC is tailor-made to aid the transition for budding engineers.

Engineers Living-Learning Community (ELLC) is a collaboration between Campus Housing and academic departments and offices and is designed to foster intellectual and personal growth. This residential program enables engineering students in their first year to live together in Community Park residence hall. On-site tutoring services and peer mentoring are accessible, as well as engineering-based programming to improve study skills, explore careers, and network with peers and professionals. Members attend house events, perform community service, learn leadership skills, and build lasting friendships through ELLC.

On move-in day, we spoke with engineering students in ELLC about starting their freshman year at Speed School.

Bio-engineering major Aaron Lopez moved from his Northern Kentucky home to attend Speed School after his interest in bio was piqued from a STEM school he attended in his hometown. “Speed School was not too far from home but I also wasn’t sacrificing a good quality of education,” he said.

Aaron, who is particularly interested in bio-medical devices like prosthetics, said this first semester he is most looking forward to getting to meet new people and seeing what college life is like. “I am curious to see how far this education can take me.”

Ashtyn Cocanougher, another Bio-engineering major, is interested in going the Pre-med route, but not in the way one might expect. “I am interested in bringing some veterinary aspects into bioengineering,” said Ashley. She said she got the idea from a robotic tail in the movie Dolphin Tale.

From tiny Burgin, Kentucky, Ashtyn is looking forward to studying what she wants to study. “I want to focus on what’s important to me and figuring out who I am,” she said. It was her junior year in high school and taking a physics class that turned her mind towards an engineering career. “I always loved putting things together and breaking them apart, figuring out how to make things more efficient.”

Ashtyn said she didn’t know ELLC existed at first but thought it was a good opportunity. “I can be around those in the same field and likely the same classes so we can discuss things and study with each other,” she said. “The people in my dorm are great – helpful and willing to sit down and talk about classes.” Ashtyn said ELLC has made the transition from a small town to college an easier one.

Landen Tomlin, who hails from Eminence, KY will be studying Mechanical Engineering at Speed.

After a year and a half studying law, Landen figured out it was not for him. “I decided I wanted to help the world so I thought I’d do something else,” he said. Landen had heard great things about Speed School, and on moving day was a little nervous, but feeling prepared.

He said ELLC gives him a whole group of people in engineering that will be working on the same stuff for the most part. “That’s what will help me move along.”

Noah Beck of Grayson, Kentucky originally thought he would be an architect. “I realized I was more suited for computer science,” he said. “Louisville was also one of the few schools with a real strong cybersecurity department, something I’m interested in,” he said.

As a typical introverted engineer, Noah said one of his biggest issues is the social aspects. “I want to improve myself a little on that,” he said. “I know ELLC is going to be really good at connecting me with like-minded individuals,” he said. “I’ve met my roommates, and they are really great people.”

Noah said he is excited to gain independence for the first time, but admits he will miss home sometimes. To keep him company, he brought something special from home – a stuffed animal that looks just like his dog, Buddy.

Louisville native Vy Pham will be studying Mechanical Engineering. She was so excited to begin Speed School she was slowly packing for a month before move-in day. “I was a little nervous, but Welcome Week excitement trumped that,” she said. “I am looking forward to meeting more people and learning my own balance of school, work, life and family.”

On move-in day, Vy was toting her guitar from home. “I love listening to music and making music,” she said. “It’s one of my outlets when I’m stressed, and since I’m going into such a STEM-heavy field I figured sometimes I will need to exercise other muscles in my head besides math and science.”

Vy, who said she will miss her dad’s cooking and her puppy the most, really appreciates ELLC and the way it provides an instant community to connect with engineering majors. “That will be really helpful when finals week comes along and it gets difficult,” she said. I’ll have a built-in support system.”