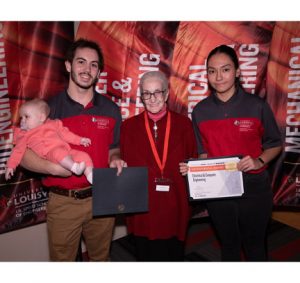 Increasing viability time for a lung during the transplant window. Improving autonomous vehicles. Learning more about fetal alcohol syndrome by studying the zebrafish. These were just a few of the innovative and impactful capstone design projects featured at the Fall 2022 Engineering Design and Innovation Showcase on November 30.

Ninety students made up the 26 engineering teams who, throughout the semester, collaborated with their industry project partners to develop prototypes or solutions for real-world projects that involve design constraints, budgets, reviews and deadlines.

“The showcase is a great way for students to display their engineering and design acumen and how it translates into real-world experience,” said Thomas Rockaway, Associate Dean of Programs and Initiatives.

“A big thrust at Speed School is preparing students to be workforce ready for industry,” said Speed School Dean Dr. Emmanuel Collins. “These projects are not simple academic exercises as our students are tackling and provide solutions that find their way into practice.”

This was the third annual event for The Engineering Design and Innovation Showcase, a source of pride for Speed School, said Dean Collins. “As a community, we are developing world-class engineers who are well-prepared to meet the challenges of tomorrow with competitive, critical thinking and problem-solving skills.”

The team “Clintelligent: A Clinical Interface for Patient Data Analysis” captured first place in the Bioengineering division for their project which makes machine learning and statistics more accessible. Dalton Aubrey, Trevor Clark and Nate Verwys developed an interface that allows clinicians and researchers to obtain high-level analytics about patient data.

“What this gives people is greater access to statistical pre-processing and machine learning models that are typically higher level in the mathematic modeling realm,” said Trevor Clark. “Users don’t have to purchase an expensive modeling computer,” he said. Clark said this can help show trends in the patient data that are not readily obvious. “We’ve been working with COVID data and looking at survival probability compared to different methods of treatment, intubation, days in hospital and other data.” The interface developed by the team will inform treatment methods and research plans, leading to better outcomes in both the clinic and the lab.

“The biggest takeaway for me was being able to apply previous knowledge from courses and co-ops to a project of this scale, one that will be going into production at some point, which was really nice,” said Nate Verwys. “The group experience has not always been as fluid as this was, but being able to have people who are knowledgeable and great at what they do, and also really care about what they’re doing – everything aligns with that.”

“It was exciting to see our mentor, Dr. Frieboes, announce us as the winner,” said Dalton Aubrey. “We could see the smile on his face and we knew he was happy with the result.”

A project focused on child safety won top prize for Electrical & Computer Engineering. The three members of the “Saf-T Child Seat” team, Liam Bellis, Iris Arias Benitez, and Michael Craigmiles, designed an updated prototype child seat that alerts a parent/guardian in the event a child is forgotten inside the vehicle, and ultimately alerts authorities with GPS information if the child is not removed. Saf-T Child Seat, which was originally conceptualized by retired industry partner Lori Forest, is patented and functions as a last line of defense against accidental infant fatalities.

At the showcase, team member Liam Bellis was holding his 6-month old baby girl. “Obviously, I had a vested interest in working on this project,” he said. “I wanted to give something back to other parents who might have a lot going on and help ease some of their stress, because it is a handful,” he said.

“The idea came from our sponsor Lori Forest, who started this project a couple years ago,” said Michael Craigmiles. “She had seen an infant car death on the news and it inspired her to create something to prevent that,” he said. “Our main goal on this project was to overhaul the communications of the device because the previous prototype had become obsolete because it used a 2G network,” explained Craigmiles. The new device is capable of a 4 G LTE connection and the sensor, which is designed to go in any child seat, picks up two critical signals: if the car is off or on, and if the child is in the seat or not.

Another Bioengineering project featured at the Engineering and Design Innovation Showcase could potentially make a huge impact in the medical field: “Ex-Vivo Lung Perfusion Chamber.” Each day, 17 people die waiting for a life-saving organ transplant, and a new name is added to the transplant waiting list every nine minutes. Lung transplants have an average waiting time of two or three years.

Team members Andrew Norton, Grant Morgan and Effy Lee worked on the development of a lung chamber with negative pressure lung ventilation which could potentially allow lung tissue to be viable before transplant for up to 10 hours. Currently, lungs only have viability for approximately two hours between harvesting and implantation.

“It was a great feeling to know I could have an impact on people’s lives in that way,” said Grant Morgan. “We have a long history of lung cancer in my family, so I was working on something that will likely be needed by my own family members or potentially me in the future,” he said.

Morgan said his biggest takeaway from the project was dealing with other people’s schedules and the time constraints you don’t think about at each step of the process – ordering materials, assembling components, etc. “Learning to balance multiple layers of a project and doing documentation in the time you’re waiting for a response was a big growth opportunity for me and something I will take forward,” he said.

“When we went in to work with our sponsor Dr. Pantalos at UofL Health, we went to the Cardiovascular Innovation Institute and when we visited that facility, we saw a pig lung being harvested in the chamber, so it’s not just an abstract project,” said Andrew Norton. “It was exciting to see I was going to be making something that would actually be tested and used and help contribute to this field of science,” he said.

Norton also said the project taught him how much thought and depth needs to go into every decision, even the smallest ones could make or break a project. “The thought and attention to detail required when you have to do a complete project on your own is kind of astounding,” he said. “It opens your eyes to what your professional life will be like.”