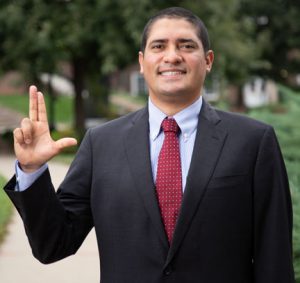 The fellowship was created in memory of Ed Toutant through the generosity of his family, several of whom are Speed School graduates. Dr. Bikram Bhatia, Izquierdo’s advisor in the department, said the Ph.D. student is an excellent researcher, who demonstrates a methodical and systematic approach in solving difficult problems. His current research involves modeling, fabricating, and testing high temperature heat exchanges using metal alloys. “There are a lot of applications for this in next generation energy systems that work at high temperatures,” said Bhatia. Solar-thermal power plants in Southwest United States, Spain and UAE are examples of where this kind of heat-exchange research could be implemented successfully.

Izquierdo, who immigrated to the United States from Colombia 11 years ago, said he was surprised to receive the $2,000 award, but was told his performance and dedication to the university deserved to be rewarded.

He was vice-president of the Society of Hispanic Professional Engineers (SHPE) in 2019, and worked with non-profit organizations to bring water filtration systems that benefited schools in remote areas of Colombia.

After receiving a degree in English in his native country, he decided to change his career path when he moved to the United States. “I was interested in engineering for a long time, I just didn’t know it was called engineering,” he said. When he first arrived, he considered teaching. But he thought, “If I moved here, I want to do something that really excites me. I want to learn more about engineering, and for me it goes beyond textbook and classwork, like the hands-on ‘heart’ of engineering.”

He appreciates that through Speed School, he has been exposed to and learned about various aspects of engineering through research projects. “It starts with the professors, who introduce topics to keep you updated on technology, MATLAB, simulation software,” said Izquierdo. “There are always opportunities to enroll in lab work.” When he showed an interest in aerospace, he was given the opportunity to participate in a project that made sensors using 3D printers for the Air Force at Wright Patterson AFB in Dayton, Ohio.

“I’m a mechanical engineer because the title says so, but I have already expanded into different domains,” said Izquierdo. “It’s been a mixture of everything including traveling overseas to install water filtration systems, fabricating microsensors using 3D printers and high temperature furnaces, and simulating particle flow in solar thermal power plants to improve efficiency,” he said. In fact, he is using his fellowship award funds to take a class, where he is learning computational fluid dynamics, or CFD. All of this, of course, is in addition to his current, cutting-edge solar thermal energy research.

He hopes to have his Ph.D. studies completed by end of 2022 to mid-2023, and his advisor Dr. Bhatia said he believes his student’s research may well inform the next generation of solar energy. “Power plants currently operate at 500 degrees Celsius in a conventional system, but what has been key that is missing in the field right now is high temperature,” he said. “We hope to build it, test it, and get it deployed because there will be a need for this in a few years,” said Bhatia. “There are also aerospace applications – something Julio mentioned he is interested in. These heat exchangers could also be used in jet engines, which reject heat at high temperatures. Capturing and re-using some of this waste heat using novel heat exchangers could enable next-generation energy efficient aircrafts,” said Bhatia.

Izquierdo said his future plans include making the leap to industry, and his dream job would include working in research at Wright Patterson or NASA, or at companies like Lockheed Martin, Boeing or Space X.  Alternately, he said he envisions possibly honing his skill sets at a company and then starting his own engineering firm that will focus on simulating, testing and fabricating.

“Engineering has made me curious about the world around me and I intend to learn the most out of it,” he said.