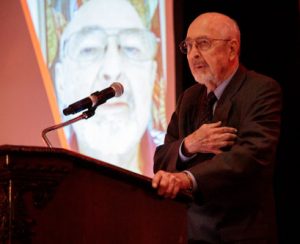 When John Aker was 12 years old, his father gave me a kit for building a DC motor, and he was immediately fascinated. As a teenager, he hung around a local TV repair shop and they let him sort boxes full of resistors and capacitors, and later help the repairman on service calls. In high school and college, he made an income fixing TV sets. All this set the stage for an Electrical Engineering degree at Speed School.

In his senior year, he and a classmate submitted a technical paper in a student conference that changed his life. “I saw an ad where Boeing was hiring experienced engineers, and I took the paper we had written with me to the interview, and because of that they decided to hire me,” said Aker.

He worked for Boeing in Wichita, Kansas and later worked for King Radio Corporation. In 1970, he changed jobs to become a Vice President of Engineering with Kustom Electronics and worked with audio systems, test equipment, communication terminals and police radar equipment. In 1978, Aker decided he preferred design over supervision, and became an engineering consultant in the Kansas City, Missouri area. He continued on that path until he retired at age 77. In his career, Aker generated 32 patents, including patents in audio, railroad, DME, vending machines and police radar.

“Speed School taught me the determination to finish a project, and I found the learning exciting; in fact, it still is,” said Aker. What does this alumni award mean to him? “This is a celebration of my many years as a problem-solving consultant.”

Aker was presented the award during Speed School’s annual awards dinner at the Brown Hotel on Oct. 21, 2022.