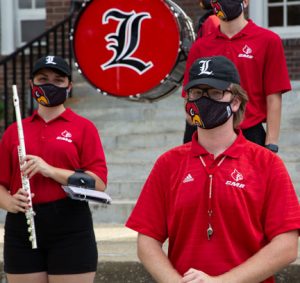 Michael LaRoche was marching in band his freshman year in high school, long before he knew he would major in engineering at University of Louisville Speed School. But the Northern Kentucky native knew he was also good at math as well as music, so now he explores both sides of his mind – and budding leadership skills – as a drum major in University of Louisville Marching Band, along with a rigorous course of study at Speed School. “When people decide on engineering, I guess like a lot of people I felt like since I liked math and chemistry, I didn’t have much choice, he joked.

“But chemical engineering did sound like fun.” Now a junior, Michael said he feels like he is appreciating the major the more he learns about it. “This past semester, I had a class in fluid dynamics and I enjoyed that. I find this kind of stuff intriguing – knowing the rules of how things work and how to manipulate them to solve problems. As I learn more of the higher end concepts, I’ll have a better understanding of what my day to day is supposed to be once I graduate,” he said.

Michael is in his second co-op rotation with Arduro Sustainable Rubber and is learning about process management and making tweaks to reduce cost while optimizing yield,” he said. At this point, he is unsure if he wants to continue down the road to a career in industry. “I am trying to gather information right now about as many different fields in engineering as I can. I might be more interested in research or even going for a PhD in the future, he said.

From day one at UofL, Michael wanted to take part in the band.  As a freshman he marched and then decided to try out for drum major that spring. “I really wanted to step forward and do something for band while exercising and developing my leadership skills. Aside from my major, it’s the most important thing at UofL for me,” he said. “The band has such a strong sense of community. We’re as tight as a group of over 100 people can possibly be.”

Balancing marching, practice and the rigors of Speed School academics can be a juggling act. “The first year, especially, was tough, said Michael, because everything was new and I felt tackled from both ends of it. But I had a great chance to talk to other students and engineering majors to get a sense of time management, understand what to prioritize and how to prepare for each week, especially game weeks.”

To Michael, having hobbies that are not career-defining is important for personal development. “It’s a great way for me to practice and exercise my musical talent without dedicating myself to that as a career. You need to have things that are just there that you can enjoy and can be your getaway.

Like most every college campus activity, COVID-19 has changed the playing field for the marching band and limited events. They no longer march on the field, but “we are still radiating energy and playing from the stands,” said Michael. The band is divided into three mini-bands each playing at two of the football team’s home games. Michael’s mini-band will play on October 24 and 31. In addition, every Wednesday, the band plays a small performance at the Student Activities Center, quad and even local retirement communities.

Michael said he personally has found the online setting difficult for Speed School classes. The content is already dense and hard to understand in first place so it’s hard not being in the classroom, he said. I really enjoyed being able to interact with other students who are not necessarily in my friend group but who I respected and I would get value from talking to them.

But when considering what COVID has forced upon us, Michael said it is important to “focus not on what we can’t do but what we can do, and continue being positive about this whole experience,” said Michael. “It will one day end, and it will transition back to as regular as we can get. It’s important to keep that in the forefront.”

One favorite part of Speed School to Michael is “its ability to teach you how to critically think. You learn a lot about how to visualize problems and overcome them, an important skill regardless of your major.

For both marching band and Speed School, Michael said he has also been grateful for the opportunity to meet some great professors. “They are just some amazing people who really care about what they do, and it’s really nice to learn from someone who has that passion to teach.”

Michael is joined by these other “Musical Math-sters” students in the Cardinal Marching Band: