From UofL to Mars, Elbasyouni Finds Passion in Engineering 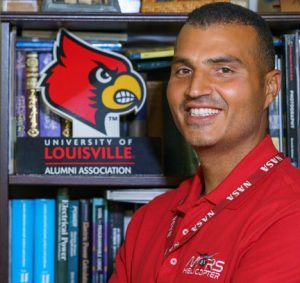 Loay Elbasyouni, a Speed School alum, played a part in history with the flight of NASA’s Mars helicopter, Ingenuity.

When Loay Elbasyouni was a 10-year old boy growing up on the besieged Gaza Strip in Palestine, he built his first antenna from kitchen parts and aluminum foil so he could receive TV channels. Even then, he envisioned building his own start-up company. But having the opportunity to work for a company that helped NASA develop the first aircraft in history to make a powered, controlled flight on another planet, went beyond even his fertile young imagination.

“You cannot imagine the feeling,” said Elbasyouni. “I didn’t sleep at all the night of the flight, I was up watching the feed all night.”

The engineer began working for AeroVironment, Inc. in 2012, where he was selected to work on the Mars Ingenuity Helicopter project, which he did from 2014 to mid-2018 when he completed the flight hardware. He was elated to see it come to fruition at April 19th’s first flight.

“Every day I had been waiting for the moment when it was going to fly,” he said. “It was incredibly exciting.”

Ingenuity has since completed two more flights to date, with the latest being April 25.

From Palestine to the Jet Propulsion Laboratory in Southern California has been a long and sometimes difficult journey for Elbasyouni.  Born in Germany, Elbasyouni moved with his parents and three brothers to Palestine at age six.

“One of my first memories was walking to school with a group of kids when suddenly they all ran into a house, and then I saw an Israeli jeep passing by, and I thought, ‘Wow I thought the military was there to protect us.’ It was a very different experience.”

He attended a United Nations’ Relief and Works Agency (UNWRA) School for grades one to nine, but often there was no access to school due to strikes or other civil unrest, so his early education was often self-taught. Elbasyouni said his father, a busy surgeon, urged all of his children to be educated, and today, of his three brothers, two are electrical engineers and one an orthopedic surgeon.

After coming to the United States, Elbasyouni went to college in Nebraska, Pennsylvania and University of Kentucky before financial issues forced him to sit out a year and work odd jobs before discovering Speed School of Engineering.

“I always loved Louisville; in fact I used to cheer for the cards while at UK,” he said with a laugh. Elbasyouni said he was impressed with Speed School’s program because it offered a hybrid study of hardware and computer and electrical engineering, something he wanted to pursue.

“When I transferred, I was welcomed with open arms from day one,” he said. In addition, Speed School helped him financially with a scholarship award after the first year, and a work/study job after his bachelor’s degree so he afford to continue and finish his master’s.

Finances were definitely one of many obstacles for Elbasyouni to overcome, coming from a country where the income is not a fraction of the United States, he said. Coming from a Middle Eastern country unfortunately complicated other matters as well.

“After September 11th, I was attacked delivering pizza to some drunk students,” Elbasyouni said. “It also meant it was harder to get a job because companies preferred US citizens, so you had to apply twice as hard to find the right company who was interested in who you really are.”

Elbasyouni has not returned to Palestine since 2000, and last saw his family in 2011 in Germany, where they now reside and he can visit them as travel restrictions become less COVID-strict.

“I went for 11 years without seeing my mom,” he said. “That was tough. She used to cry every day.” The engineer said he would like to return to visit his home country someday, but travel and the political conditions within the country have made it trickier than it used to be. “I have good memories of growing up in the olive and orange groves, one reason why I live in Southern California now,” he said.

Coming to Speed School of Engineering in 2002 was a key turning point for Elbasyouni’s successful career path. “I had incredible mentors there. I remember when I wasn’t even sure how I was going to pay for my Master’s and they helped me get that job in the computer department,” recalls the engineer. In another case, Elbasyouni said he was struggling to pay tuition and needed $500 to finish the semester, and one of his professors offered to pay it himself.

“It was every single small thing like this,” he said. “I received mentoring and guidance from every professor I had. In my previous college experiences, I had nothing like that. I felt like a number, whereas at UofL I felt like I’m part of a family.”

For budding engineers, Elbasyouni said he believes Speed School offers an excellent path to success: small classes with a lot of hands-on lab experience, the math program which promotes camaraderie and connection with other students early on, and last but definitely not least, the ability to talk to any professor about any issue.

“It’s always an open door,” he said. “They appreciated the fact that you wanted to learn. Speed School really gives you that passion for engineering.”

After graduating from Speed School with his Master’s in Electrical & Computer Engineering in 2005, Elbasyouni worked for a variety of companies as a hardware engineer designing electrical vehicles, including General Electric in Louisville and start-up electrical vehicle (EV) companies in Boston and California, before he was contracted to design the motor controller and other components of the Mars helicopter. Today, he’s a senior director at Astrodyne TDI in Santa Monica, California, responsible for west coast operations. The company designs and solves problems for aerospace, commercial aviation and superconductor industries.

In his role at Astrodyne, Elbasyouni also recruits and hires engineers, and that is where Speed School shines, he said, even in comparison to bigger name engineering programs. For example, Elbasyouni was able to take a senior level design job himself straight out of college.

“I see engineers from big engineering schools that don’t know how to hold a soldering gun or know the basics. They know a lot of theory but don’t have enough hands-on experience. These differences in the way a lot of Speed School classes are taught have given me an advantage in the field.”

It was at Speed School that Elbasyouni’s philosophy about engineering and life also began to evolve.

“Before, I always wanted to be in that entrepreneurial world but afterwards, I became active in environmental issues and wanted to be a person to try to make as much change as I could in the world,” he said. “It’s why I took the avenue I did exploring alternative energy efficiency. I am proud to have a negative carbon footprint on the planet. It changed my way of looking at life.”

How does Elbasyouni hope to make his mark on the world as an engineer? He said he is already “in process” with his next career step, creating his own start-up, and he may work with NASA again in the future.

“It’s always been my goal to have my own company,” he said. “I want to work at things that are going to make the world a better place, providing tools to make it easier for people in underprivileged places.”

His philosophy is not just international, but global. “I believe we can change the world by engineering new ways to communicate, utilize the environment, and do everything around us,’ said Elbasyouni. “We are all one, we just don’t realize it. We all want the same things – to enjoy life and live in peace.”

Elbasyouni said Speed School was an amazing experience that made his journey possible, and wanted to recognize the faculty, some of whom have passed away.

“There were so many professors who had a big influence on me in so many ways, and helped me through my career. “I want them to know they’re all part of the accomplishment we achieved on Mars!”

From UofL to Mars, Elbasyouni finds passion in engineering

Loay Elbasyouni, a Speed School alum, played a part in history with the flight of NASA's Mars helicopter, Ingenuity.

This story has been updated to clarify Loay Elbasyouni’s contribution on NASA’s Mars Ingenuinity Helicopter project.