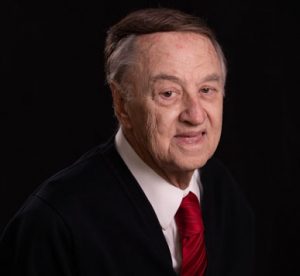 A long-time staple at the JB Speed School of Engineering, Dr. Larry Tyler has one of, if not the longest spanning continuous tenures at the University of Louisville. Starting in 1963, Tyler has a Bachelor’s and Master’s in Mechanical Engineering, as well as a Master of the Arts in Math, and an interdisciplinary PhD in Engineering and Physics, all earned at the university. Tyler has a storied life outside of his time spent in academia, having worked as a musician and producer of a local television program, co-created with his brother, and featuring regional artists.

Bookending that career though is his work as an educator, where you can see echoes of his experience behind the camera in the videos he produces with Dr. Ralston for his Engineering Fundamentals course.

Tyler started playing music at eight years old, taking piano lesson even a bit before that. Primarily an alto-saxophonist, by fifth grade, Tyler, who lessons from the band director at Fern Creek High School, was a member of the high school band. Along with his brother, also a musician, Tyler developed a professional style by high school, performing at bar mitzvahs and performances at clubs and bars around town. Between his connections and interest in the music community, Tyler parlayed his burgeoning talent as an engineer into a budding television career.

“We did television here in the 60’s. We did some of the courses on video. We’ve done quite a few things now,” said Tyler. “Before there were stereo television sets. We did a television show. My brother was working with public television, WKPC, at the time. Kentuckiana People’s Choice. It’s now owned by KET. At that time, it was owned by the Jefferson County Board of Education. My brother and I kept working with engineering. We used two-inch tape to be able to record the high frequencies you need for video.”

At the time, audio technology was limited to mono recordings, single track sound with a finite spectrum of possibilities. For the Tyler brothers, this was an engineering challenge that they could not resist, putting their minds to work on the problem. Making use of a pulse track used for syncing video, they discovered a way to create a primitive stereo track.

“What we learned is that there were two audio tracks on those tapes. They used an audio track called Q-track for editing. We found that the Q-Track had as great of fidelity. You would put that cue in where you wanted to edit. We forgot the Q-Track and put another audio track on that Q-Track. So we had stereo on a video, the only way they were able to do stereo and video at that time,” Tyler says.

In order to accomplish this feat, the second recorded track was sent out to an FM Stereo station at WVEZ from their station at WKPC, now KET,” Tyler said. “My brother went out and sold this into syndication. We were into syndication for two or three years there. He had an easy time selling this to TV stations that owned an FM station, because they would like to do a stereo program, to do the video on the television station and at the same time play the stereo audio track on the FM station.”

The show was designed to spotlight local talent, primarily musicians. Tyler, a fan of big band music, reflects happily on his experiences, “The premise of the show was an entertainment show with vocalists and instrumentalists. We had the singer Joe Dow that made ‘Wooden Heart.’ He sold more records of ‘Wooden Heart’ than Elvis Presley. Kay Blare; she got a music degree from UofL. The musicians were all professional.”

A New Lease On Life

Tyler is enriched by his experiences, both as a musician/producer and through his efforts shaping burgeoning minds.

He admits, “I stay fresh because I teach freshman, mainly. My second dean said I’d burn out. Mentally, I still look forward to coming to what I do. Probably now, since I don’t have as many things going on, I’m more attuned to it.”

Recently, Tyler had a near-death experience, after contracting Hepatitis A after a freak accident cleaning garbage. Tyler contacted his daughter Noël, who rushed him to the hospital, where things took a turn for the worse.

“They were going to put a pig’s liver in me. Somebody had a tractor accident within three hours. I shot to the top of the list, because I was dying,” said Tyler. “Within three hours, I had a liver transplant that went as well as it could go. My wife comes in and tells me that I had major surgery. It wasn’t until the next morning that the doctor came in and told me.”

He walked away from his experience reinvigorated and with a new appreciation for life. He explains, “I feel pretty lucky. I can tell you, on my way home from that, I was probably crying just looking at the sun. I’ve grown to appreciate the Earth. It did that for me.”