Longtime Speed School supporter and Industrial Board of Advisor member, became the second-oldest person to go into space aboard New Shepard 22 last August. 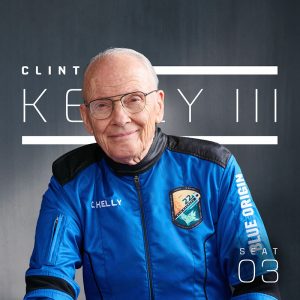 Retired engineer Dr. Clint Kelly is one of the oldest men ever to go to space, second only to actor and famous former Star Trek captain William Shatner. In August 2022, Kelly got the opportunity to fly aboard a Blue Origin rocket as part of the New Shepherd 22 Project. A Renaissance man with a wide diversity of interests, Kelly has also travelled extensively, photographing wildlife on every continent in the world and publishing a book of penguin photography.

In his long and illustrious career in engineering, Kelly was a pioneer who started the Autonomous Land Vehicle project at Defense Advanced Research Projects Agency (DARPA) in 1984 and is credited with creating the foundation of the technology base leading to today’s driverless cars. Closer to home, Clint Kelly is also a decades-long member of the Speed School of Engineering Industrial Board of Advisors. To the engineering school’s River City Rocketry team, he’s a different kind of hero.

It all started about twenty years ago when a mutual friend of then Speed School Dean Nicky Wilhelm suggested that Kelly might be interested in working with Speed School’s Advisory Board. At a board meeting in 2011, Speed School student Nick Greco, who founded the River City Rocketry Team (RCR), came into the meeting and put a rocket down on the table.

“My first thought was how I had built one myself many years ago,” said Kelly. “I was always interested in how things worked more at an intellectual level than a hands on,” said Kelly. “But I had a good friend who was great at the hands-on, so he and I used to build rockets, and we had to build everything from scratch,” he said. 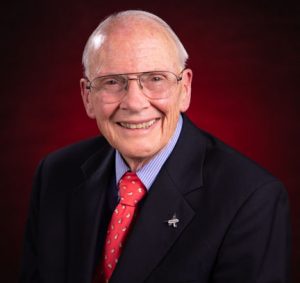 Kelly suggested to the board that they support this rocket team, a student-led organization that allows students the opportunity to design high powered rockets and compete in a challenge against other universities across the country. Though the other board members didn’t share his interest at that time, Kelly decided to get involved anyway, and has never wavered since in his enthusiasm or support for the team.

Founder Nick Greco said the RCR has come a long way since that day. “The year I founded the rocket team at University of Louisville, we had zero funding and we were building most of our rocket in my apartment kitchen,” said Greco, who now works as an aerospace engineer at Blue Origin. “Clint saw and supported our vision and was a huge reason why it’s grown into the polished group it’s become at the university today.”

“They have a lot of great ideas and I’m continually impressed by them,” said Kelly of RCR. “What they learned by building these rockets and then competing in competitions were practical things,” said Kelly. “How to do the equations, and then how to translate the equations into hardware and address all the problems you have when you do that,” he said. “They relate the calculations to what they actually observe when they launch it, and they do the diagrams themselves as well,” he said.

It is this hands-on experience that has helped former RCR members secure prestigious jobs at NASA, Blue Origin, Space X as well as startups.  “For a startup, it’s immensely appealing because they don’t have the luxury of having lots of people and they want people that can do lots of different things and do them well,” said Kelly.

Kelly, a philanthropist who supports a variety of other causes, said he only gives to what is important to him. “There is a feeling on my part that Speed School gives extremely good value. It costs to get an education that allows you to be successful, and I think Speed is a remarkable bargain,” he said. “It’s a very high quality engineering education.” 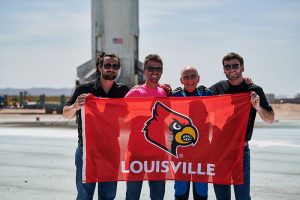 Another Speed alum, Gregg Blincoe ’15, is another success story with Blue Origin, where he has worked for more than six years. “I knew I wanted to get involved in aerospace when I was up early one day watching the Mars Curiosity Rover land and I saw the excitement and joy in all the engineers’ faces,” said Blincoe. “I wanted to be a part of something bigger than myself and River City Rocketry gave me that opportunity,” he said.

Blincoe said the skills he learned at RCR had a direct impact on his professional career and have been relatable to his job on a daily basis at Blue Origin. “RCR would not be where it is today, or would even be what it is today, if not for Clint Kelly,” he said. “He saw something in the idea of the team and the students behind it, and has been a supporter and mentor from day one.”

The guidance Kelly gave to RCR students came full-circle when Kelly was granted a rare opportunity to fly into space in August 2022 on one of the rockets RCR students Blincoe and Greco helped to design and build. Kelly said his space flight experience was “the thrill of a lifetime.”

Blincoe was excited to give back to his former mentor. “I was so excited to realize I’d be there for his launch,” he said. “He got me the job that put rockets in space and now it was my turn to go and put Clint in space.”

“I probably would have never had the opportunity to work at Blue Origin without him,” added RCR founder Greco. “Getting to see him fly aboard New Shepherd, a rocket I had the opportunity to design part of – it was pretty surreal,” he said. “I hope he gets the chance to go back to space again, hopefully aboard another Blue Origin rocket,” said Greco.

“I’ll be forever grateful for the support and faith that Clint had in our team and RCR,” said Blincoe. “My life has been forever changed,” he said.