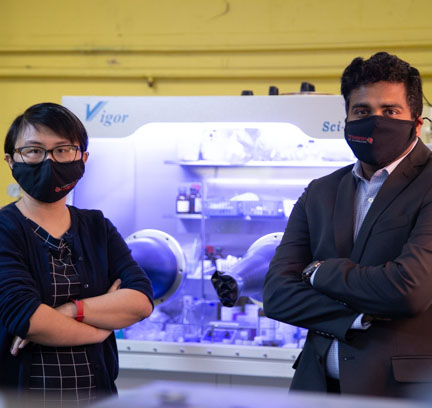 Dr. Badri Narayanan and Dr. Hui Wang received the grants by DOE-EPSCoR through their University-National Lab partnership program. In all, DOE funded only 31 research projects within this program, two of which are from Speed School, a rare occurrence in the annals of research awards. The two grants started on September 1, 2020 and will run for three years.

EPSCoR is designed to build capabilities in underserved regions of the country that will enable them to compete more successfully for other federal R&D funding. Under the DOE program, university researchers from EPSCoR states such as Kentucky partner with researchers at DOE National Laboratories on topics of common interest and in order to promote relationships.

The first grant, “Controlling reversible phase transitions in rare-earth nickelates for novel memory devices,” is $580,000 with additional EPSCoR funding of $75,000, and involves the investigation of new materials in micro-electronic research in partnership with two established scientists at Argonne National Laboratory (ANL) in Chicago.

The advent of big-data analytics, artificial intelligence, and accompanying transformative ideas, such as internet-of-things, self-driven cars and personalized medicine, has resulted in a surge in computational demand. Principal Investigator Narayanan explains that “this rise in demand comes at a time when advances in current silicon-based VLSI (Very Large Scale Integration) platforms have saturated. Projections show that computational demand would be ten times the supply by 2040, so we have to explore new computing architectures that go far beyond the current silicon technology, said Narayanan. One promising way would be to build platforms inspired by the human brain and biological neural circuitry, “which is 10,000 times more efficient than modern computers,” he said.

To explain the inefficiency of modern computers, Narayanan compares its working with that of the human brain. “Modern computers have two separate units for processing –CPU and memory — RAM, between which data has to be shuttled for calculations,” he said. “That is a huge amount of data shuttling through interconnects that consume lots of energy. On the other hand, in the human brain, memory and processing happens in the same location, which avoids data shuttling and improves energy efficiency. Our brain gauges a situation using information from various neurons, and produces a series of well-timed pulses, which control our response. Each sequence of spikes, along with timing constitutes a memory or habit, such as walking or being careful with fire,” said Narayanan.

In order to build these brain-like computing platforms, new materials need to be developed which can exhibit multiple electrical resistance states in response to applied voltage pulses. One such material is the one Narayanan’s project is centered on, which is rare earth nickelate materials. He said, “The project will identify new ways of inducing changes in electrical properties of these materials at will.”

The value of the collaboration with a national lab is multi-faceted, according to Narayanan. Not only do the two established scientists from ANL bring additional expertise to the research program, but will also enhance the overall professional development of the two graduate students and postdoc involved in the program.

The skills learned as part of this project are suitable for a wide range of careers. “The computational material science tools will open up career prospects in data-science and quantum computing in addition to more traditional jobs in engineering,” said Narayanan. “Companies are looking for people with skill sets in computations and material science. They are going to learn the science behind it, which is training them for the workforce.”

Additionally, the professor said the project will benefit Kentucky in numerous ways, including helping the state by bringing these novel off-site based micro-electronics concepts to the commonwealth. “It also falls under the umbrella of the state’s EPSCoR’s ideals of energy efficiency because we are developing computing platforms that are addressing that need.”

“Conventional Li-ion batteries that contain liquid electrolytes have raised safety concerns due to the flammable solvent and liquid leakages,” she said. “Also, compared to lithium ion batteries, the solid-state sodium ion batteries will be more economic because in the earth’s crust sodium resources are much more abundant than lithium (2.83 % for Na vs 0.01% for Li).”

In a small scale application such as a cell phone, the cost savings might be smaller, explained Wang, but for middle-or large scale like electrical vehicles and smart grids, it could make a significant difference. “With the larger scale, safety will be a larger issue as well, which becomes more important,” she said.

For her collaboration, Wang and her Speed School students will work with the neutron technology available at Oak Ridge National Lab to study the underlying principles of defect structure and Na-ion conduction in novel sodium ion conductors via the integration of experiments and theoretical simulation.

Wang said one PhD student and one postdoc in her group will focus on the experimental part including material synthesis and electrochemical characterizations as well as neutron diffraction, while one PhD student in Co-I Dr. Narayanan’s group will perform computational study on ion conductivity and interface stability.

“This is a great benefit for the students and the postdoc to have access to this national lab and use the facility there,” said Wang. “They can even build a network there and these collaborations are good for their career after graduation,” she said. As for the university and the field itself, Wang said this project will positively impact the future of green energy technology.

“This research will give us a guide for future design and synthesis novel superionic conductors, which contributes to developing cheaper and safer energy storage systems for electrical vehicles and smart grids.”