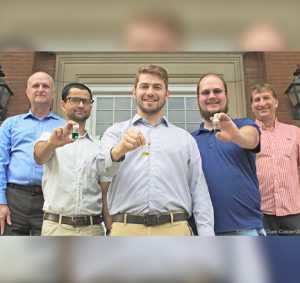 Chemical Engineering PhD Student Blake Martin and two other UofL graduates, Peter Armstrong and Sashil Chapagain, have won $200,000 for their startup company, SoFab Inks LLC. The prestigious U.S. Department of Energy competition focused on next-generation technologies and now the trio is one of only three companies to compete in the final stage for an additional $500,000.

The team won The American-Made Perovskite Startup Prize for technology that they developed alongside Conn Center for Renewable Energy Researchers Thad Druffel and Craig Grapperhaus.

Martin, who got his undergrad degree in Chemistry from Centre College, is currently working for his PhD in Chemical Engineering.

Martin said the idea for SoFab Inks evolved from the team’s perovskite manufacturing research project. Together, Martin, Armstrong and Chapagain decided they had a good idea for the Perovskite Startup Prize. “As we did customer discovery, we received more and more positive feedback about our idea,” said Martin. “From there, we applied, and we were ecstatic when we got the award, and were validated in our idea.”

The expertise and support of investigators from The Conn Center for Renewable Energy Research was also instrumental in advancing the startup, said Martin. “Thad has experience launching a startup out of Louisville and mentored us throughout the application process and business plan, and Dr. Grapperhaus largely helped develop the technology at the core of our business,” he said.

The UofL technology developed improves solar panels by replacing other expensive photovoltaic materials with a liquefied “ink.” This more cost-effective, high-performance liquid can be deposited as one of the conductive layers of a solar cell called charge transport layers that allow electrons to move and produce electricity. The UofL-held technology is patent-pending.

“The mission of SoFab Inks is to accelerate the decarbonization of electrification by improving efficiency, scalability, stability and bankability of perovskite solar cells,” said Martin. “The $200,000 prize will allow us to scale our process up and begin selling to customers.”

Martin said the startup plans to do some R&D/product development before expanding the marketing and sales team. “We hope to launch our first product line within six months.” In about a year, their progress in commercializing the product will be evaluated for the final prize award.

As for Martin, he plans to defend his dissertation before the end of the year, graduate and transition full-time to SoFab Inks. A native of Lexington, Kentucky, Martin followed his now-wife to Speed School, and said the engineering school afforded him opportunities to grow and experiences that he would not have dreamed possible. The couple are expecting their first child. “I can’t wait to meet her,” he said.